This probably isn't news to you, but if you give humans too many choices they tend to freeze up and not pick anything at all. There is a good video about it here.

I've known that and yet I've been striving to give my players a lot of options when designing the locations they'll be exploring. I'm posting this because I wonder if my little abandoned monastery had too many choices.

Here is the dungeon in question: 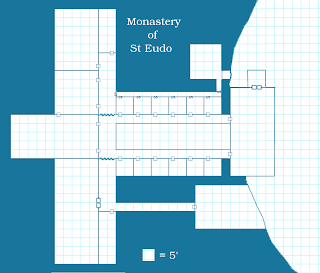 This monastery is built on a rock outcrop 50' down inside the Maw. To reach it players had to ride down in a basket, then take a wooden lift from the top story to this one. The 10' x 10' square at top right is the lift they came in on.

When I designed this I was trying to avoid making it linear, so you see, from the very first room they have to decide between two doors. Both parties that explored this place chose the nearest door. Then the party is confronted with a corridor of doors as far as their light source illuminated. Both parties checked each door as the went down the corridor.

Both parties felt a draft and eventually discovered the secret passage behind the monastic cells. Then they had a quandary, because they had already seen some weird bogey-like creatures in the dim light ahead and now they knew they could be flanked.

They both seemed to lock up when the parties made it to the U-shaped intersection with the curtains. At some point the second party had had enough and started cutting down all the doors and drapes so they could at least have better visibility.

I'm wondering if a dungeon map can avoid being linear and still be more focused. I'm afraid my location detracted from their sense of what to do, where to go next. This was exacerbated by the fact that they had no real reason to be there except the prospect of booty. And it didn't help that I was trying to creep them out, so every now and then when they'd stalled out I would make a bogey appear behind them: whispering, riding a pug.

I'm curious as to other DM's experience. Have you seen parties just locked up in indecision? Is that just a sign of inexperience? With no sure way to go does an experienced party just choose randomly and push ahead?
Posted by Telecanter at 11:18 PM