The Prophet of the Pot 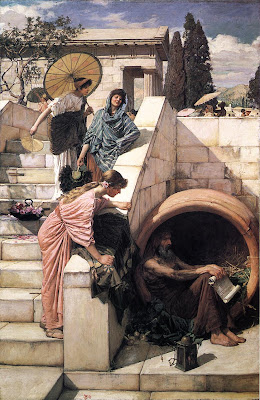 I'd heard of Diogenes and his search for one honest man with his lamp. I think I even knew about his stoicism and challenge of convention. But somehow until this week I missed that dude lived in a pot!

I stumbled upon a line drawing online that showed this and I thought it would be a perfect NPC for Nidus, my own Striped Mage of sorts. He could offer information and maybe identify things. Only after searching did I realize it was Diogenes and that him living in the "tub" was famous. 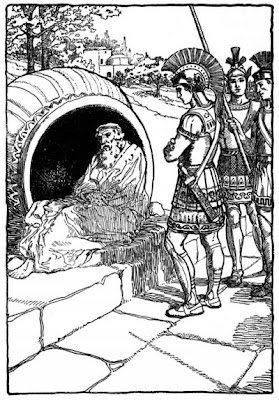 Tub is a translation of the Greek pithos which was a big ceramic vessel, often sunk into the ground. Some web pages translate pithos as jug or jar, which makes sense for the smaller versions. But for my American ear pot sounds better for something that big.

Frustratingly, I somehow lost that first line drawing I came across. (If you find a good public domain illustration of Diogenes in his pot let me know) But there are several other illustrations.

There is a famo 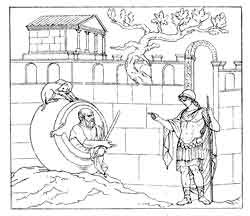 us anecdote of Alexander the Great meeting Diogenes and the latter not being impressed. This doesn't interest me much because it's just the kind of anecdote someone would make up. It does point to the fact that the idea of Diogenes in his pot is archetypal enough in that it was considered for creating this kind of apocryphal tale.

Maybe the hardest part of DMing for me is acting as NPCs without going into cliche. It would probably be a good idea to have some clear guidelines of my Prophet of the Pots values and ideals. 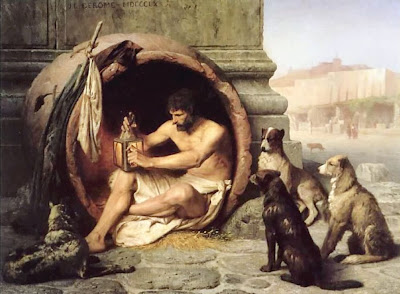 Trouble is, I don't think Diogenes would give a fig about helping adventurers find treasure or identify their material goods-- he lives in a pot! But maybe that's the point-- he's a rich source of info that the players need to learn to tap, find out what matters to him, find out how to interact with him.

And also, my Prophet of the Pot is not Diogenes, maybe he has different ideas about things. Do you have any iconic information giving NPCs in your campaign? Any ideas on how you might run a Prophet of the Pot?
Posted by Telecanter at 7:18 AM