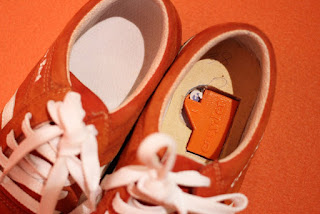 They lead you by giving you signals to your feet not exactly the slight pull I mentioned with these magic shoes, but I figure close enough.

It's been a year since I DMed last.  We previously left our party after one of them had one the Regatta Gloriosa.  Now the adventures continue:

We rolled on the Fad of the Day chart and negotiated the answer to mean bling was in season.  Which is fitting because there would be a procession from the docks to the central cathedral.  That is because in winning the regatta G secured the right to change the city's religion for a year.

So, Shopping & Dragons happened for a while as players tried to bling themselves up.  I am horrible at estimating prices and may need to just buckle down and develop my own simplified price lists for the city as well as maybe develop a mini-game to make it more engaging for everyone.

After the blinged-out crew finished the procession there was a banquet attended by all the most important families in Ulminster.  After many courses of some of the city's famous delicacies there was a toast.  Suddenly one old priest lurch back and melted into a tarry substance.  Chaos erupted, people running and screaming it was an ill omen.

The party investigated the body but there wasn't much left except his staff that had scratch marks around the tip.  G asked the Captain, his diety, for the power to speak with the dead and was granted it.  After asking a few questions they determined the old dude had no clue what happened to him, but he mentioned a strange word "sevreson."  Asking around, the party ended up talking to Learned Henry who informed them that sevreson was a rare, rural digestif and proceeded to sing a song about it.  Talking to another old priest Bonny Burleson who was the deceased roommate, they found he often snuck off to the cellar, for what they assumed was a snort of the stuff.  On searching the cellar, though, they found nothing resembling the rare liqueur.  G asked the Captain for gudiance and they were led to a rack in one corner of the cellar that could be swung out.

On the other side of this secret door they found a natural cavern with a keg.  on top of the keg was some tarry substance that looked like a rat had died and its foul fluids were dripping down near the tap.  They just began searching the caverns when we stopped for the night.

Oh, I forgot, Aphrodisia can see the future and had a dream of a scantily clad person clambering up a wall in the cathedral to steal a jeweled cross.  and several times during the evening (procession, banquet)  strange masked figure appeared.

Reflection
So, about the last two notes-- I'm trying to plant seed for a thriving Snake cult they can chose to investigate (the scantily clad thief) and also start escalating some craziness in the world related to people donning masks that will occur whether they get involved or not.

Backing up, while super simple, this is the first time I've ever ventured into something mystery-like.  It seemed to go ok.  I didn't even think about the cleric's ability to speak with the dead, though.  So, next time I try something like this I should have weird clues for the dead person to give.

Also, I introduced Henry and Burleson specifically so that the players would have different avenues to find out about things.  They are two of my three ideas for distinct knowledge npcs (the Veteran and the Storyteller).  It was a bit of a rusty start, but hopefully it will become more fruitful.

In addition to thinking about pricelists I mentioned above I want to create my own version of Chris Hogan's Fad of the Day chart.  I think the idea is brilliant, but I think I might be using it slightly differently than he intended,  I mostly want something fresh and potentially funny to differentiate social interaction each session.  So, I need less support from the chart for repercussion for not following the fad and more help with what the fad actually is.  I'll share it if I make it.  Hope you are all have fun gaming with friends.  See you next post.
Posted by Telecanter at 9:49 AM 0 comments