My Time in the Wasteland 2

There are spoilers in this post.  Go finish the game, then come back.

Another aspect of Fallout 4 that entranced me was the settlement system.  A wasteland is only a wasteland until some knucklehead like myself decides to start cleaning up and organizing it.  The game allowed you to scrap rusty car bodies, tires, and fallen trees.  I spent hours just cleaning up the areas around my settlements.  It took me a few tries, but I found an efficient hub-pattern of supply lines that connected the resources scrapping gave me, making them available to build useful new structures in any settlement.  Clothing and arming my settlers was another fun time sink. that made clothing found in the wasteland meaningful, in much the way that requiring materials for repairing things made scrap more real.

In the beginning of the game I was anticipating big changes involving restoring society, like getting bottling plants back on line or resettling cities like Concord.  With all the defenses you're able to build and the emphasis put on how happy settlements are, I also thought there would be a big struggle for the hearts and minds of these little towns by the factions in the game.

Unfortunately neither happened.  And, as I slowly learned how settlements worked I had less and less interest in messing with them.  For example, no matter how clever or overpowered your defenses, if you don't go to help when a settlement is attacked, it will lose and be conquered.  Which makes a certain design sense because then it makes the player want to drop everything and rush back to help, right?  Well, except a settlement that is completely overrun pops back to it's full population the moment you travel back.  And it takes only a tiny hit in happiness.

In fact, the only way for settlers to truly die, seemed to be when I did travel back to help them and the battle was a rough one.  And you want to talk about rough battles, the irony of a leveled-world is that the higher in level I get the worse the world gets for everyone around me.  As a 90th leveler you don't want to return to a settlement unless you want to see everyone slaughtered around you.  So the game trained me to leave settlements to their own devices and ignore their cries for help.

What are Settlements for?
I had hours of fun playing Fallout 4, and no game is perfect, but Bethesda made some design decisions that seemed to work against it's own goals.  Maybe these aspects of the game are related to different play styles and I'm blinded by my own preferences, but let me continue talking about settlements to explain what I mean.

So, players can have fun dressing and arming settlers and cleaning up and building in a settlement.  That's enough of a reason to have them.  Well, to have one, or two, or even a few.  But 30?  Having places to set up artillery seems like an good reason to have a well-developed network of settlements, except the times I found artillery useful were very few.  You basically have to have some enemies in a walled-in area they can't run and engage you, for the slow artillery to be helpful against them.  And by the time that you have a well-developed network of settlements, you're probably powerful enough to just go in blasting anyway.

I think the best reason for settlements as little outposts for exploring the world.  You have a safe place to rest and heal.  You can dump all the junk you find in local ruins and with the supply lines feature, you don't have to worry about hauling most of it anywhere else.  As you go up in level you can make shops and sell the items the supply lines won't transfer.  Settlements make for perfect little outposts in a exploration

Except . . the game pushes you to fast travel.  Early on it gives you missions that are randomly spread all over the map.  Some of the settlement missions are time sensitive.  Because of this hopping and rushing around it made sense for me to pick a place to set up a home base.  Once I did that fast traveling back to it became normal procedure and all those many settlements became superfluous in game terms.

I think to make the settlements more than aesthetic time sinks, Bethesda had to either limit fast travel in some way-- which would make them useful explorations bases-- or make the plot involve the settlements somehow.  The latter seems so obvious, so almost there, I wonder if it was planned and got cut.
Posted by Telecanter at 2:15 PM 0 comments

My Time in the Wasteland

This post has Fallout 4 spoilers.  Go finish the game before you read on. 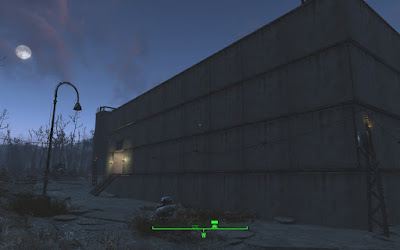 My grandparents owned a wrecking yard.  Their "savings account" was six T-birds parked under a shed roof, with tattered convertible tops, and a flock of geese crapping on the seats.  When I squeezed between their fenders I saw the cool potential.  It instilled the idea that you could find and fix up things that might be unavailable any other way.  That, sure, money could get you a nice car, but knowledge and perseverance might get you a rare one.  So the beginning of Fallout 4 had me pretty ecstatic.  You're given an old set of T-45 battle armor early in the questline and you realize that 1) you can work on each of the parts to upgrade them 2) paint them in different ways 3) mix and match different model parts if you find them and 4) find those parts on chassis scattered around the wasteland.

I was thrilled.  I put all my skill points I gained leveling into perks that allowed me to repair and use my armor.  I scoured the wasteland for parts and learned to follow the rail lines and freeways looking for military checkpoints.  I searched exhaustively for the magazines that unlocked new paint jobs.  I gathered junk with a purpose.  I went everywhere in my armor and got pretty unstoppable.

And it made some sense.  How could one person make a difference in a place like the Commonwealth.  Well, what if that person was a veteran that knows how to repair power armor and dogged enough to search for parts to put together a suit that tops anything even the local mercenaries have. 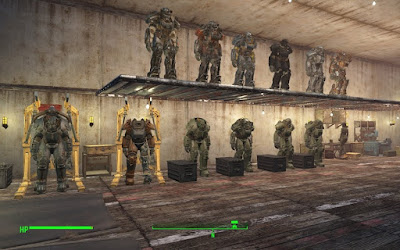 Unfortunately, any non-procedurally generated world will have an end to exploration, and now that I have been everywhere on the map 3 times, have found the best armor available, and all the paint jobs available, I have no reason to explore anymore.

But what about using my finely-tuned suit of destruction to help society get back on its feet?  I'll write a bit more soon about the new settlement system in the game and some of the ways it was a disappointmant.

In the mean time, I hope you and yours are having a Merry Christmas and Happy Holidays!
Posted by Telecanter at 10:46 AM 0 comments