I realize my suggested player goals are biased by what I find fun. I've always defaulted to the mage seeking more power through knowledge of spells and rituals. But I think if you leave the categories broad enough that players will find room to pursue and be rewarded for goals they enjoy. So here is some rumination on some more possibilities.

Maybe you like figuring out who is pulling which strings and ultimately you want to pull those strings yourself. I could see this working: finding out information could provide rewards that are common, uncommon and rare based on how big a scoop you discovered. And I suppose these power seekers would receive rewards for attaining levels of power: you found an informant, common, you've gained entry to a 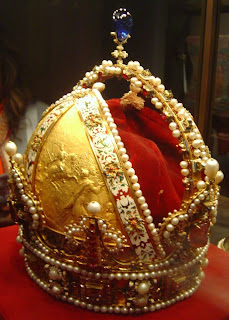 guild, uncommon, you are a guild leader, rare.

Mixing the knowledge goals and achievement of power goals muddies things for me and starts getting a little to fiddly/specific. Also, the way oe gave less XP for magic items because they are their own reward, isn't achieving power its own reward? I think a player really interested in climbing in political power could work within our simple Knowledge Seeker category. How they put the knowledge to use is up to them.

Another potential problem with rewarding political goal gains is that it seems more solo oriented. What is my artifact hunter going to be doing while you are trawling the court hangers-on for juicy gossip?

What about the classic tale of a member of a disgraced clan trying to clear the family name or get revenge on the powers that brought the family low? I think there is room in the 5 categories for this. Maybe the magic sword passed down from generation to generation is a rare artifact the player is hunting for. Maybe the knowledge of the whereabouts of the nemesis is an uncommon XP goal. I suppose you could give XP for achievement of name-clearing or raising the clan status again but I'm not sure how I would measure that as a DM. Rewards for the goals leading up to revenge/justice seem clearer.

I have similar reservations about this as the last category though, 1) you have mixed goals, knowledge/artifacts/achievements, making everything more complicated, and 2) you have a very personal set of goals, why would me mage interested in spell-seeking want to hed into the black swamps to find your father's killer? 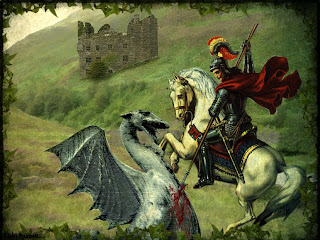 I you are a warrior at heart, perhaps you won't be so interested in the goal of protecting your fellow adventurers. You really want to bring acclaim to your name by feats of your sword arm. You want renown for facing off against multiple foes etc. But what would the levels of reward be? I imagine uncommon would equate to either fighting multiple foes at once or a foe of great prowess. And then rare would be twice that? So to get rare XP rewards your first leveler is fighting a minotaur single-handedly or likewise? I don't like the sound of this. Seems like a reward system meant to increase your player death toll.

Let me drop the possible new categories here and think about reward categories in general. I realized a few things as I was typing the above paragraphs:

A reward system only works well if it is understood by all parties.

In other words, you want players and DMs to be on the same page. This is easy with treasure rewards; mo' booty means mo' XP (and mo' problems, ha!), less so with XP for killing creatures; "How many XP is a goblin shaman worth? should we go back and kill it or just lug this treasure out?", and especially difficult with XP rewards for roleplaying; "Does the DM think my dwarf would chase the bandits or stay to loot the corpses? Does she want me to say something witty or be dour/taciturn because that's what dwarves in her world are?".

See, the good thing about having broad goals is that they can come from random rolls. Common, uncommon, and rare artifacts are only a chart roll away. As a DM you can specify the likelyhood of an uncommon result in a certain type of locale but you aren't required to place items in advance. In fact the risk of the opposite (and this is true of the categories I was pondering above) is that it becomes story-driven and railroady. Rather than a party of adventurers heading into a crypt for loosely related purposes, your character has to twist everyone's arm to go into the Lich Queen's lair because that is where your ancestral blade is.

Can't these two rules-of-thumb contradict each other, though? If a reward system works better when I know exactly what rewards I get for which actions, how do I know how common something is in your world? I think this is a possible weakness and strength of broadly defined reward goals at the same time. On the one hand, players won't know how common finding Gauntlets of Ogre Power will be. So when they pull it from a chest they might be thinking "Is this good, or really, really good?" But on the other hand, a cool aspect of rewarding based on frequency is that players will eventually come to know exactly what is common and what isn't. "We have only ever found Gauntlets of Ogre Power that one time." Hmm, maybe the last is too obvious to really be important, but it seems that reward knowledge would be perfectly transparent if you are rewarding on the first sighting of a creature and that players will realize the second sighting is less significant. Which leads me to think:

Rewards based on rarity will push players to explore.

Right? If you've observed goblins and rats and orcs, or you've found all the first and second level spells twice over, you'll want to go over the next hill or push ever deeper into the megadungeon.

Okay enough blathering from me. What say you?
Posted by Telecanter at 8:57 AM 3 comments 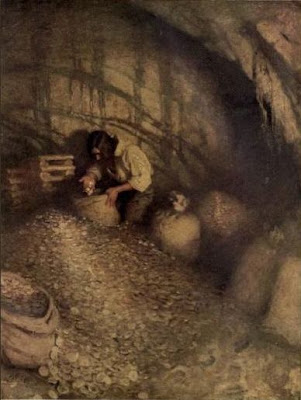 I was just talking with a buddy at work about systems of reward in gaming. I think we started talking about video games but he is the friend I made the Ziggurat bachelor adventure for so we ended up with old school gaming.

I realize that systems in games can be counter-intuitive. For example, one would think giving experience for killing monsters makes sense-- you become more knowledgeable at how to kill a troll by killing trolls etc. But what happens is that system of reward pushes players to fight things, even things they have no reason to fight, even things they should by all rights be running from. Eventually you have players "clearing out" dungeon levels, which would be craziness in a world where living was considered a valuable thing.

The old school way of using treasure as a general, abstract reward solves that problem-- see a troll, hell run, why should I risk my life fighting it, we already found its hoard. But it makes every player out to be a treasure hunter. I've got no problem with a campaign where that is understood, but I am interested in other possibilities. Here are some ideas that I and Mah-Kuss the now-wedded brainstormed:

If rewards push players toward certain actions, you want to find rewards to push them toward actions that would work with groups of adventurers risking dungeons. But the best solution would also allow players a little choice in the goals they want to pursue. So, how about these general categories:
Okay, so instead of just raw treasure Bob, your player, makes an agreement with you that his character goal is knowledge. There could be several subsets of this, the two we thought of were exploration (knowledge of locations/wonders) and ecology (knowledge of botany/zoology). And to keep things as simple as possible, you assign goals just 3 levels of difficulty:
These will represent how likely it is to obtain these goals as well as the reward for achieving them. Let's say I have a character who is a Scholar. Observing a giant rat might be common. So, the first time I see a giant rat, I get X experience points. Getting a sample of giant rat tissue/hide might be a little harder: 2X experience points. And, finally, observing a giant rat den and how it functions for a few hours might be harder to accomplish thus 3X experience points.

If we see the above as being a vertical example, horizontal could work as well. For example: giant rat is common, troll is uncommon, will o' the wisp is rare.

This three level reward could apply to all the categories above: common artifact an ancient sword; uncommon, a full suit of armor; rare, one-of-a-kind magic blade.

Defender might be a little different: common everyone comes back alive, uncommon no one takes a scratch on this adventure, rare no scratches and it was incredibly dangerous.

Adventurer is a different beast altogether. I was thinking of warriors doing things for the honor of it, or perhaps clerics doing it for the faith of it it. "It" being any of the above goals. And we realized this might be perfect for new characters, because they could receive multiple experience awards early on when surviving is so difficult. For example they might earn an XP award for finding treasure, an artifact, and getting everyone back alive. But then at some level they could be required to choose one of the other more specific focuses (so, Charlie, you're 3rd level now, what do you see your character wanting?).

This would be a way that players could have compatible goals that would give them reason to venture into dungeons/tombs together and yet not force them all to be tomb robbers. Your wizard player really likes the idea of finding spells, there you go: common, uncommon, rare. Your fighter is looking for better gear: common, uncommon, rare. Your player wants to pursue some other goal that can be reached by just raising money (house, clothes, good food), fine let her seek treasure the old fashioned way.

We envisioned a story emerging from these slightly different character goals. For example the party is down in a dungeon and coming back out. The Scholar sees what looks like a roper in the next chamber and desperately wants to investigate, the Collector has the Crown of Arpas and could cares less, the Defender is happy everyone is till healthy and strongly objects to investigating.

What do you think?
Posted by Telecanter at 7:06 PM 8 comments

The Seven Giants of the Urals 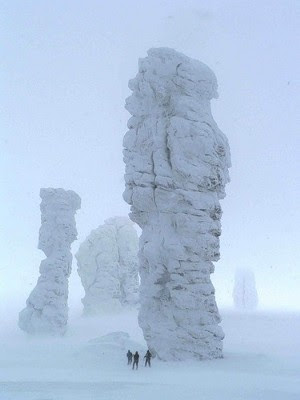 I had to resurface to share this awesome find. A real land feature from the Urals. I saw this on Neatorama. Amazing.
Posted by Telecanter at 5:26 PM 4 comments