I started switching my silhouettes to scalable vector graphics to provide for better lossless scaling and such (see here), but I was working on Linux then.  Only after my computer died and I was back on Windows 7 did I realize that windows didn't even have the capability to view svgs.  I mean, if you click on them in Explorer they open up in your default web browser fine, but you can't see what you have in a whole directory at a glance.

What that means is all these years, people might have been downloading my zip file of silhouettes and not being able to see all the images available at once.  Maybe having to view each separate file in a browser.  That sucks.

Well, I found something called SVG Explorer Extension here that gives Windows 7 the ability to draw the little picture icons for svgs.  I've never used Windows 8 so I don't know if it works there.  Clicking on an icon will still open it in the browser unlike other images, which open in Windows Photo Viewer.  (Or, if you install Inkscape a svg editor you can set them to open to that.)  But you can increase you icon size to the max and get a good overview of all the files available.  Hope this is useful.
Posted by Telecanter at 1:32 PM 3 comments

More silhouettes for your maps, handouts and rulebooks.  These are all in the public domain, use them as you wish.  First, I think this would work well as a wight: 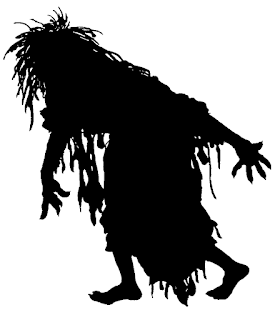 And a couple horses: 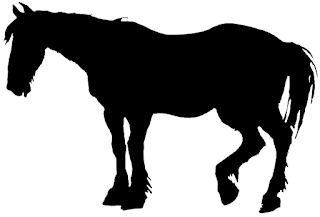 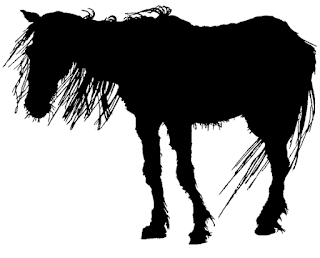 I'm having some technical issues and will have to add these as svgs to my zip file later.
Posted by Telecanter at 9:33 AM 4 comments 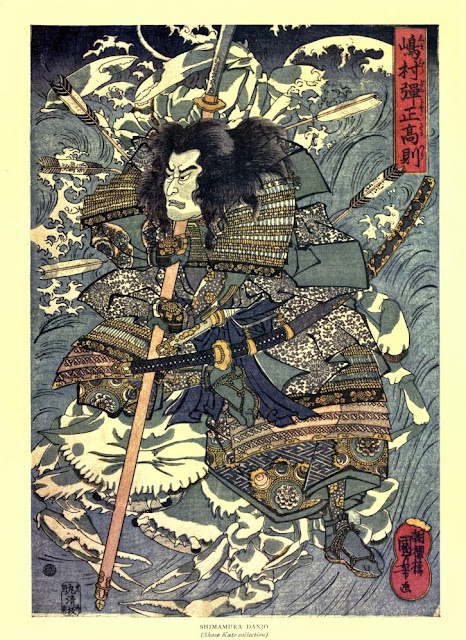 I wish I had a bigger, higher resolution image for the next one, because the monsters are great!: 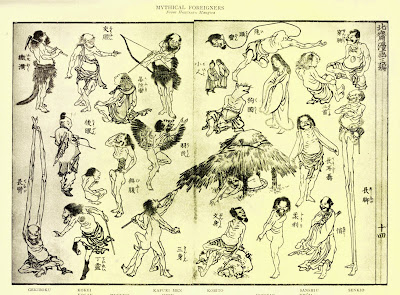 I was recently trying to come up with magical properties for masks. This might come in handy: 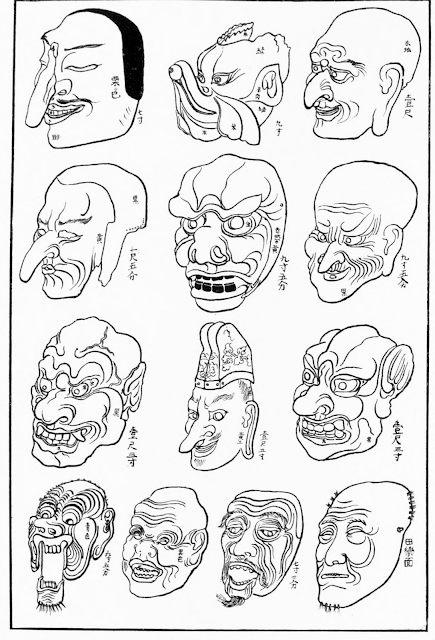 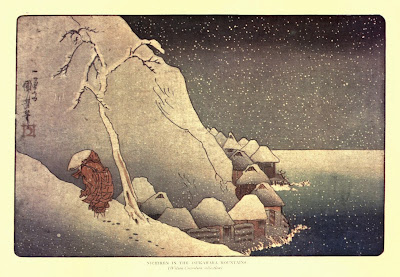 These images are all from this book.
Posted by Telecanter at 6:07 PM 1 comments

I thought these woodcuts were cool and might be useful to represent npcs.  From this book published in 1633.  I would say that puts them in the public domain but apparently the book scanner claims copyright, so . . . who knows.  I edited them a bit. 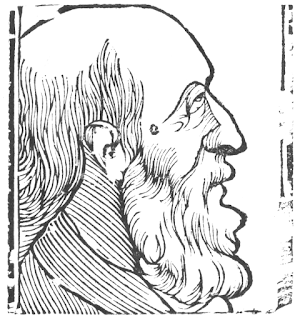 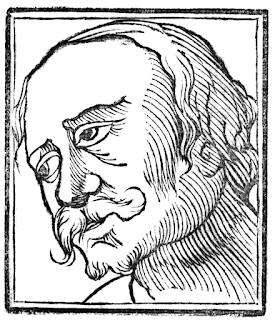 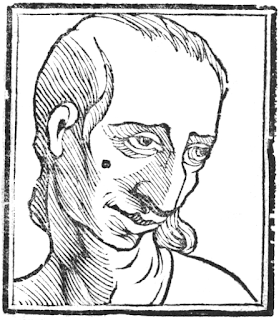 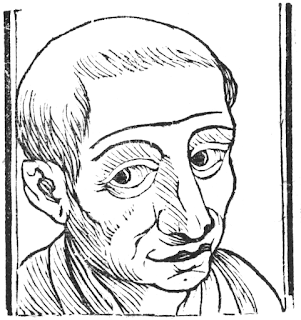 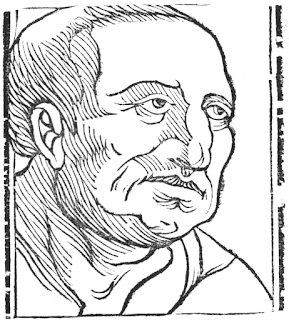 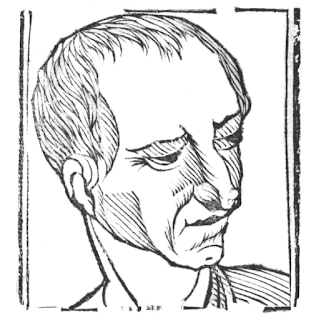 Posted by Telecanter at 9:58 PM 5 comments 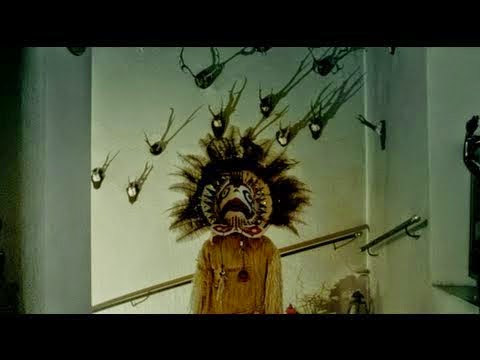 The old, the desperate poor have taken to wearing masks.   And in these crude pieces of wood adorned with feathers, they present themselves, one after another one, to all who know their name.  Then these masked ones fall lifeless, like spent husks.

People say doing this will give you a young, beautiful body.  People say take a mask if you want to start over.  People say children in nearby villages are singing strange songs and leaving home.  And that the Emperor himself has started touring the land in a golden chariot, wearing a mask.  People say more and more of the crowds that line the roads to watch him pass stand silent in masks as well.

I'm currently trying to shake my players out of the city and get them back into creepy, dangerous dungeons.  But I've made it hard because the city has been interesting with unexpected events all the time.  I've known for a long time I need a way to drain off their money, to drive them to look for treasure.  So I finally sat down and worked out a chart for costs of living.  I based it on blog posts I saw here and here. 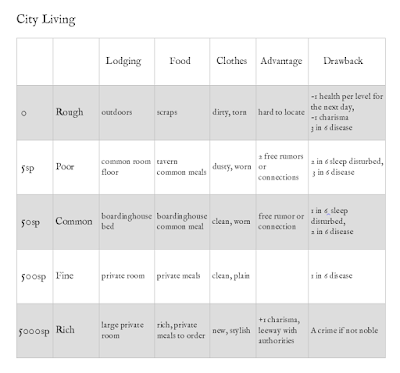 As with most my stuff this is a rough draft that needs development and revising.  I wanted simple labels for different levels of comfort to ease communicating with my players.  I wanted more than three levels.  This is because I knew I wanted sleeping on the streets and luxurious living but I doubt my players will ever use either and I wanted them to still have a bit of a choice of how comfortable they were living in the city.

I'm horrible about pricing stuff but as I was messing with the prices I noticed they were close to a pattern so I made them one to aid remembering.  Of course this immediately brings to mind how much it would be just to buy property to avoid all this.  And that is a whole other can of worms.  Although, I suppose even owning property the comfort level in regards to food and clothing could still be comparable.

I originally had a chance of having something stolen while you sleep a drawback of sleeping in common rooms, but my players weren't having any of that.  They didn't like it being something they couldn't prevent (taking their agency).  So I switched that to other people being robbed, yelling about it, and ruining your sleep.

My players requested safe item storage as a perk for the Fine/Rich levels.  I'm torn, because I'd want that too, but can nothing ever be stolen from them?

The food, lodging, and clothes columns aren't mechanically important right now and I thought about collapsing them all into a little blurb about that level of living, but it might aid me in describing how disheveled they (and npcs) are so I'll leave it for now.

I'd like a disease/affliction chart with lice and bedbugs and all kinds of filthy stuff to amusingly tell them they've been afflicted with.


I don't have anything fleshed out for the rumors or connections items either.  I might be able to use a chart I've for dreams that foretell the future, or for family drama for rumors, but I don't know.  Rumors seem to be usually DM generated adventure hooks and I' never that prepared in advance to have multiple rumors ready.

Anyway, if you've got ideas or more examples of similar charts, let me know.
Posted by Telecanter at 7:16 AM 8 comments

It's been a while since I played these, but since my computer died I would have to re-dowload them all to refresh my memory about them and I don't have the energy right now.  So take my comments as what stuck in the mind of a casual player.

The Forest
The forest is a survival horror crafting game, which seems an odd mix of genres to begin with.  I'm not experienced with survival horror at all, but I thought the point was to always feel out of your depth, uneasy, unsafe.  While crafting games tend to be about mastery and slowly gaining control over an area.

The island you are on isn't infinite and the world is not a voxel world.  You can build structures and permanently chop down trees.  Food and water is a concern and tribes of hostiles.

There was a moment when a band of these cannibalistic weirdoids found me, were walking up slowly and checking me out, that I felt some real fear.  That was cool.  But being killed by them, didn't kill me, it put me in some cave of theirs that I had to escape.  So the second time it happened it felt more like an annoyance.

So, you are trapped between what seemed to be several bands of these hostiles and you are meant to build a little settlement with racks to organize your sticks and gardens to grow vegetables?  Didn't feel right.

A small annoyance was that, while there are plenty of alcohol bottles to drink from and craft Molotov cocktails from, you can't store water in them.  Which means you have to walk and immerse yourself in a pool to drink.  And thirst was off in that if I remember you could start taking damage after one day of not drinking water.

This is the game from this list that I played least.  But if you are a fan of survival horror, maybe it will be more interesting to you.

Savage Lands
This is intended to be a metal, hardcore, barbarian vision of survival where you have to worry about starving, freezing, and getting killed by wolves and monsters at every turn.  The monsters aren't quite as thick as the zombies of 7 Days to Die, but you'll have to fight them over and over to get needed crafting resources.

This is not an infinite world, in fact it is actually a set island map which appears to grow in difficulty as you travel inward.  You can build structures, but not change the landscape otherwise.  You use up ores you mine from rocks, I don't know if they eventually respawn.

One of the ways the game makes things difficult is to strictly limit your inventory.  Everything you build needs sticks and rocks and logs and you can barely carry anything.

Another common way to increase difficulty in a crafting game is to add wear to items.  Which is fine, unless you get the balance off.  I made a pair of leather boots in this game that wore out before I could get the required materials to make another pair.

A third, obvious, way to increase difficulty is to increase the amount of items a crafting recipe requires or the difficulty of acquiring the items.  Probably the moment I lost interest was when I saw the crafting recipe for all the clothing required logs!  So, they want you to feel a sense of accomplishment when you have finally managed to craft enough bags and backpacks that would allow you to even carry the ingredients to make your leather armor, but requiring 25 logs to make a set of clothes seemed so absurd it threw me right out of the game.

I've always been more of an explorer, interested in seeing not only what's in the world but what's possible in that world, so survival games that are more about balancing on a knife edge of luck and anxious, perfect strategy lose my interest pretty quickly.  If you are the kind of player that loves the Dark Souls games you might like Savage Lands.
Posted by Telecanter at 9:44 AM 2 comments