I ran across these while looking for images I might use to represent angels.  They came from here.  A few of them could be dungeon entrances.  The rest could be locations in your campaign world.  I plan to revisit some of these for use as silhouette map icons of churches and towns.  These are all in the public domain, use them as you wish. 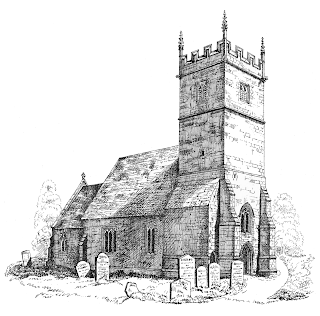 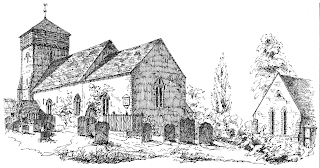 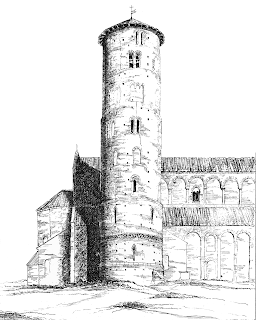 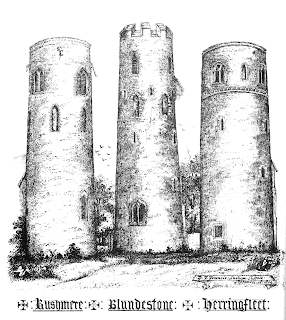 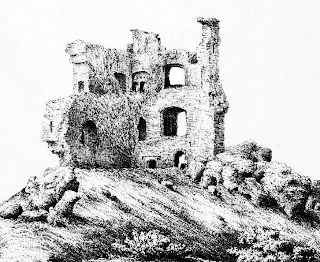 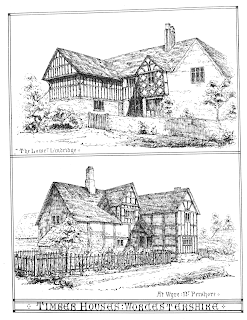 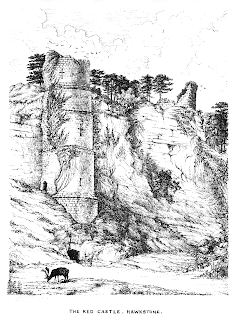 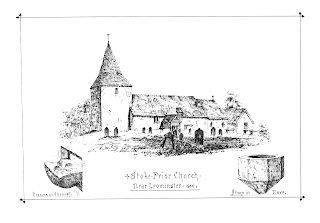 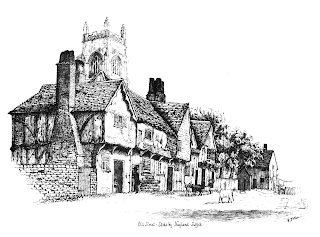 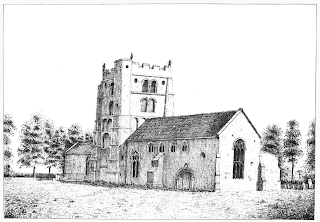 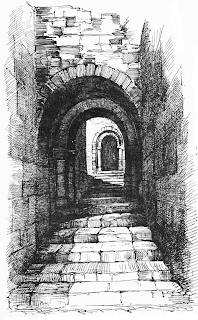 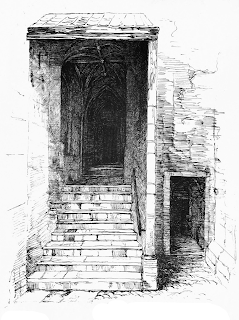 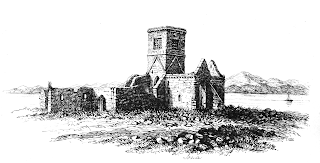 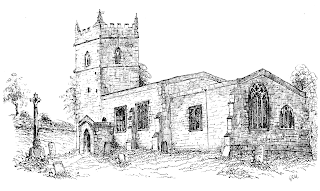 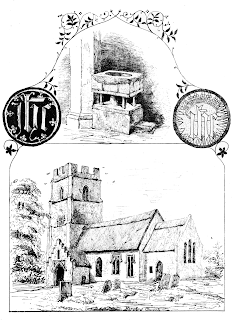 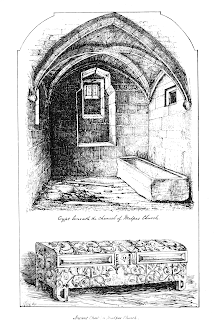 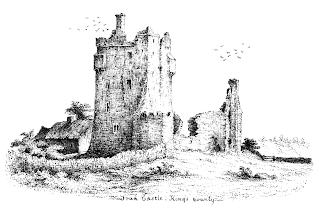 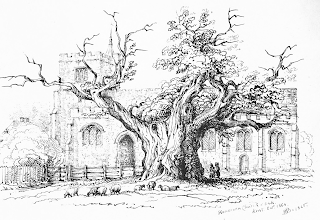 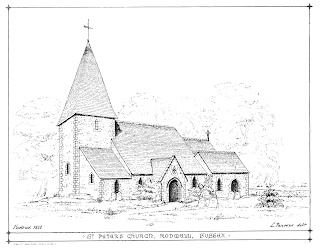 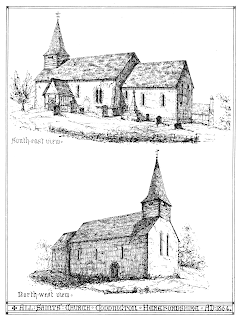 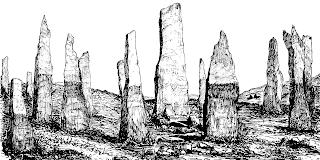 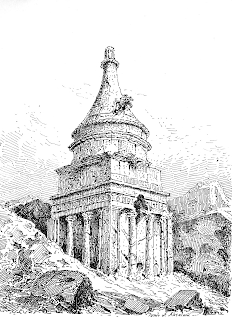 The last engine converting pain to desire is a rough, black cube as big as a cart.  Pain inflicted in its presence is said to slowly fuel a change in the inflictor.  And in this way the infamous lich Red Petals was said to gain the ability to stop time twice in a day, children tortured around him as he lay reading on the cube.

I'd say these spell slots would be usable even by non-wizards.  Because that would require a lot of damage to be dealt for it to become crazy powerful.

Psionic powers is another possibility if you want to avoid spell-slots.

I might want other smaller pleasant effects such as removing addictions, removing fear and troubling afflictions of the mind, insanities and phobias and such.  Some positive effects that would happen immediately and get players messing with the engine.  But then, maybe the engine is more relevant as an artifact sought by the powerful of the campaign world-- something to be found and fought over in a grander way than just a toy to be examined by players in a dungeon.

Are engines just dark angels?  The world is never as simple as a binary.  Is it?  Are engines the engines that drive the function of the angels?  If so, what strange and terrible fuels could other engines run on?

Note: this came from a dream I had last night, the line "you are the last engine turning pain to desire" in my head as I woke up.  There was another line from earlier in the night but I forgot it.

More engines sure to follow.
Posted by Telecanter at 9:19 AM 2 comments

I think I have to lower my own standard on what I post just to get something posted these days.  Work is still sapping a lot of my creative energy.  So, today, a more casual ramble.

What have you been up to recently Telecanter?  I've been playing a lot of video games.  I got on a western kick for a bit playing a mod for the original Mount & Blade called 1866.  The mod had some issues, scripts not working, the occasional crash, and yet I found myself just as excited to play it, if not more than the triple A Red Dead Redemption.

I think the main draw was the variety.  You can play as a Comanche. Apache, U.S. Army, Mexican Army, Outlaw, or lawman.  I'm not sure how many guns are available in the game but there are many.  Pistols, rifles, carbines, shotguns.  They all have different speed of fire, speed of reloading, damage, number of shots and penalty for horse back use.

I'm not super interested in tons of guns in modern settings, but for some reason, seeing the Pattern 1861 Trade rifle with its brass tacks in the stock or the nickle-plated Winchester repeater, these historic guns, brings out the boy in me.

And it all matters in the game.  Because the guns that let you fire multiple times, say a Spencer repeater, do less damage, while the single shot carbines, like the Burnside, do much more.  Do you want to kill a target with one shot or blaze away, close range, at a lot of unmounted targets?

There isn't as much variety in the horses you can choose compared to the other Mount & Blade games, and protective gear is pretty much non-existent to fit the genre.  The skirmishes have less tactics and more high-speed gun play.  For example if you play as Comanche, pretty much all of your troops are mounted and that first version of Mount & Blade won't let you re-designate units.  So everything is cavalry and you can't order some cav to do one thing while other do something else.

The mod did one thing that is pretty interesting with the format, the different big factions own towns, but a town can also have a hotel, which is like a little appendage town.  Some also have banks.  Because these hotels are not owned by the big factions, but by gangs and posses, this allows outlaws or lawmen to get a foothold without having to face the full fury of one of the big factions like the Army.

The mod also allows relations to cool of with different factions, so you can raid a wagon train and slowly, slowly the faction it belonged to will forget about you.  You won't be eternally at war.

Troops cost a lot more than the default game.  You won't have a huge army for a while.  But there are lots of companions around to get to join you cause.  I ended up with my own company of irregulars of about 20 mounted companions.

I played for hours.  But once I secured a hotel, fort and village close to each other, I cooled on the game.  As is typical with me, once I see the path to complete victory in a strategy game it just starts feeling like a grind to me.  I don't enjoy slowly taking over each city.

The mod is a bit immature in some aspects.  You can tell dialogue was written by teenage boy for teenage boy, for example, but I could largely ignore that.

I got a chance to house sit for a friend that has an Xbox/Red Dead Redemption and I wanted to play it again to remember what it was like.  I played it a lot when it first came out, but I mostly remember enjoying the hunting and chafing at the plot forcing me to do things.  Alas, I forgot how slow the game starts, like a movie with quicktime events.  Cut scene, walk over there, cut scene, ride the horse over there.  Uggh, I didn't have the patience.  And I can't think of a better example of designers believing the future of games is to make them more like movies.  I read a comment on the web once that RDR has the greatest video game ending of all time, which SPOILER, is essentially rocks fall everyone dies, you don't have a choice.  If that is the greatest video games have to offer I'm pretty sure movies already provide that in much better form.


A thing that really struck me is how this crappy mod for a crappy old game allows you so much more freedom.  You can, gasp, be female!  You can be Mexican, Indian.  You can pick your own name and decide whether you want to steal horses and kill settlers or hunt down those who do.

Anyway, that's enough of a ramble for today.  If you own the original Mount & Blade and want to get some old time west gun battles in 1866 is pretty fun in my book.

Posted by Telecanter at 9:36 AM 6 comments

Over the years I've tried in my creations to utilize objects folks might have at home, like playing cards, poker chips, and dominoes.  One of the reasons for this is availability, but the corollary of that is if they are common things people will be pretty familiar and comfortable with them in mini-games or in-game puzzles.

Just yesterday I thought of a familiar pattern I've never seen any one use-- the pattern on a football (soccer ball).  The pattern, called a truncated icosahedron, has 12 black pentagonal faces and 20 white hexagonal ones.

I think there is a lot of potential here, though for what I'm not sure yet.  We humans have pretty good spacial memories, so if you have a "top" firmly marked it would be pretty easy to remember all the 32 different spots you might interact with, even without numbering or labeling them.

At first I was going to make an angel based on this, using a d4 and a d8 to randomly generate one of the 32 spots.  But the more I thought about it, the more I realized there is a quite a bit more potential.  For example, each of the hexagons shares sides with three different pentagons.  What if these pentagons had certain qualities, heat, light, or whatever and the different hexagons might be the varying combinations of those qualities.  I'm thinking weather, or maybe beauty, something with lots of possibilities to fill the 12 black spots.

The more I think about it the more I like it as a possible very simple weather manipulator.  And seeing as the Sleestak pylons are one of the weird influences that led to my angels, that would be pretty cool.

I would have preferred to figure an example all out before posting, but I'm anxious to make, share, and converse-- my blog has been quiet too long.  If you can come up with a cool use that has 12 qualities interacting, let me know.
Posted by Telecanter at 11:59 AM 6 comments

The Angel of Memory

Stepping on a disc removes a memory and replaces it with one from someone else that has stepped on the angel in the past.  These may be aeons old.  What you remember could be:
What you forget, hmm, I'll leave that up to you.  I was thinking class skills basically, and that they could be remembered as normal be the time the character reaches next level, or sooner if they hire a trainer.  So a fighter might forget how to use long swords for a level but know a spell they can cast from their mind once.

Stepping on the first disc is free, additional cause the subject to lose 100xp per lvl.

I imagine it would be possible that a character would lose something so important to them they might step again and again onto the angel to try and get it back.  To simplify resolving this I might say a new memory is placed in the upper left disc and is shuffled through them with each new memory added.  So, a player has nine tries to retrieve that particular memory before it is rotated into the aether.  It isn't lost for good, because other memories are rotated into the discs each time they are used, but who knows how many thousands of attempts would take to find it after it has left the discs.
Posted by Telecanter at 9:13 AM 3 comments

The Angel of Music

The Angel of music appears as three alabaster-white cylinders hanging in mid-air, each shorter than the last.  Disturbing one of these cylinders will produce a clear, resonant tone.  Each cylinder a different tone.  After three tones have been produced all living creatures in earshot will be affected in one of three ways:

To keep things simple, I would tie the effect to the first cylinder hit.  To keep things unpredictable I would determine this randomly.  In other words, the smallest cylinder doesn't necessarily turn everyone into a toddler.  But if I rolled that cylinder "B" is the youthening one, then any three tone sequence that starts with that cylinder will turn things into toddlers of their kind.

You have to hear the tones for the effect to work.

For the second effect I would make it a complete refresh: parasites, scars, tattoos gone, lost limbs regained etc.  This could serve as the bait (they've read about it somewhere and want to get an eye back or something) that could make a cautious party mess with the Angel at all.

If this interests you see this and this.
Posted by Telecanter at 8:13 AM 3 comments