Into The Maw - Party III

A third expedition headed into the depths, with three new players and one returner. That totals nine folks that have gone down into the Maw. Crazy, I would have never guessed I knew that many people interested in gaming.

This is what happened on their journey:

The series of wooden lifts under the Monastery have the unfortunate property of splitting a party up, because they can only bear the weight of three people at once. On the first level they encountered a door with the faint sound of a fiddle behind it. They left it untouched. On the next level a kind of terrace garden held the cross-legged body of a man turned away from them. Further investigation revealed a giant toucan-colored slug eating his face.

After dealing with the slug the party went down another level which held a door with two recessed handles and cryptic inscriptions around them. It was at this time the party was set upon by several black, buzzing bird-like creatures with long beaks while the magic-user and most of the hirelings were 50' above. Roscoe the hireling and Bottle the Rogue would never leave this landing.

They took a wooden lift down another level. Here they found a woman in shock clutching a backpack. After some attempts to calm her Fishguts speared the unfortunate wretch and took her bag full of silver. (This was Gena, mother of Hamo, hireling of Ehud, survivor of the ill-fated first expedition into the maw).

Then it was steps down. The steps of the Maw are 2' wide and 1.5' tall. They take time to traverse. After an hour of travel they encountered a city carved in the stone of the Maw. They continued on. After another hour they encountered a series of natural caves with the sounds of drums emanating. They continued on. And then they had reached the waterfall.

The stairs that cross under the waterfall, are wet and slippery. Mouse and then Skrag fell to their death's before more black birds attacked causing the party to reluctantly give up their drive into the depths.

The party then backtracked to a city carved in the sandy colored stone. 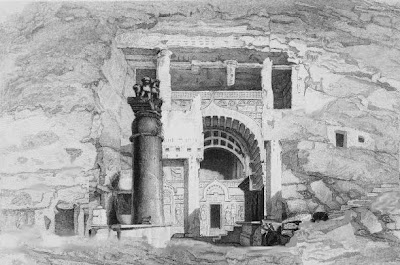 They were looking to find a place to hole up and camp but unfortunately picked a city with no doors. Exploration revealed an indoor orchard and a kind of arena. There were strange wooden guardians that they took care of fairly easily. They found a strange copper torc on a skeleton and Fishguts put it on immediately. She was suddenly changed and could not decide on anything. The party slept in the city with a rotating night watch. They were attacked once in the night and a blow from a wooden guardian almost took the head off of Seamus.

Come dawn the party was quite ready to head up, out of the Maw. They decided to make one stop in the monastery's crypt. The dead were disturbed and the greedy party lifted the stone sarcophagi lids to get any treasure inside. This worked well once but the second time a pale, white fist smashed the life out of young Fishguts.


This game was less fun for me because Rather than exploring the abandoned Monastery which is sort of natural (it's closest to the surface) the party pushed and pushed and pushed down into the pit. They had no conception of how deep the Maw is (it's based on the real Cave of Swallows). After climbing down stairs for 3 hours they still couldn't see the bottom in the darkness below.

I don't know why the pushed so hard ahead, I think the returning player, who'd been to the monastery twice wasn't interested in going back again. Maybe they thought the deeper they got the more treasure they'd find, which is a good assumption, unfortunately I hadn't prepared that far down so I didn't have great rewards ready.

I think my biggest lesson as a DM is that even while striving to give players freedom I need to give them a bunch of hooks. The only hook they had involved treasure at the very bottom, so, probably another reason they pushed so far down.
Posted by Telecanter at 2:24 PM