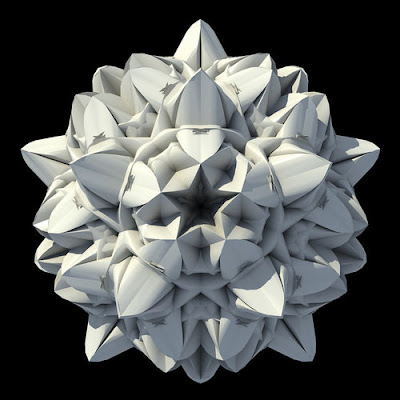 The Petalmind is a palm-sized sphere apparently made of living petals. While soft and pliable, it is nearly indestructible; crushed it will slowly regain its form. It emits a beautiful smell that differs for each individual. If touched, all sentient creatures in range will share a communal mind. Secrets, abilities, even senses are shared. Petalminds will not hurt one another. Petalminds eat together. Petalminds sleep together. Petalminds decide together.

After the Golden Guide I was trying to come up with an artifact that would offer interesting gaming situations and seem equally alien but in a good way. My layman's conception of evil is basically selfishness to the extreme. So, an extreme state of good might be the complete dissolution of self.

I don't know if this would work in play. But I thought this might be extremely annoying and horrible for evil parties to suddenly know who stole what from whom, who was planning to murder everyone, who wasn't who they said they were, etc.

I also thought it might offer some interesting play options if the whole party shares each other's senses, or if every person could cast the magic-users spells (but still limited to the number of spells the MU could cast), or if every one had to unanimously agree before actions are taken.

Or, what if when the Petalmind is touched orcs, ilithid, or even cultists are within range? What might the party do with their knowledge and abilities?

But then, a party of Petalminds might be the most un-fun game ever. I would definately have clues of how to be rid of the Petalmind near it and allow players to do that relatively quickly/easily so they get the weird experience without getting too frustrated.

Let me know what you think. I found the picture above on Tumblr but tracked it back to here.
Posted by Telecanter at 8:06 AM