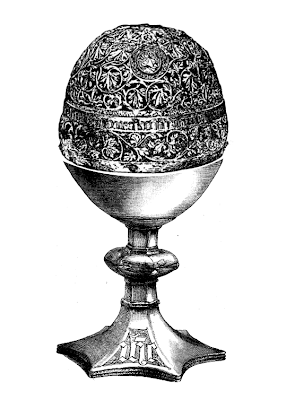 The Golden Guide is a chalice with an ornate, hinged lid. Sometimes called the Oracle of the Cup, if the lid is lifted

it is revealed that the cup is filled with strange flesh, and straining in this, a lipless mouth baring teeth. This mouth makes one-word utterances in a raspy hiss. If fed fresh blood it will answer a yes or no question. Everything it says is a lie.

I came up with this sweet little puppy back when I was brainstorming for the bachelor party Ziggurat, then forgot about him.

How I'll use it in play. If I know the answer to a question, I'll just lie. If I don't know I'll try to wing it. If it is a detail that doesn't seem megadungeon-wrecking one way or the other I'll roll:
And if the player's question is muddled or two questions, etc, it will say "Unclear." Those answers may seem reminiscent.

Now the fact that it lies sucks. But once the players determine this is will be a very powerful object. Am I setting myself up for problems?

I'll leave myself two escape hatches: 1) they have to feed it fresh blood, hopefully making it at least an annoyance to ask constant questions and 2) it is not omniscient.

Have you used any kind of oracles in your games? Or had problems with players using too much divination?
Posted by Telecanter at 3:56 PM