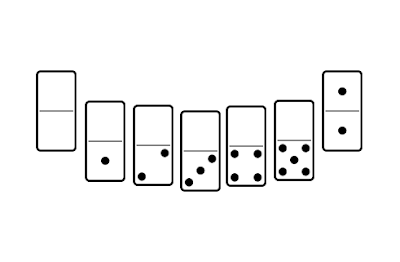 I've blogged a few times about dominoes before. To cut to the chase, here is the simple mechanic I used successfully in play the other day.

Pull out the dominoes seen above. Turn over. Shake up.

Ask the player to draw:
If you want to give it some campaign flavor you can. I called the three challenges: God's Teeth, God's Jaws, God's Eyes.

I like that it is simple, but seems more dramatic than dice (everything is a die roll but he was petitioning his god!). And it seemed pretty easy for him to understand the likelihood of success, in a way it might not if I said "Roll a 1-3 on this d4, next time you'll need to roll a 1-2 on a d6."

You can mess with the domino pool you're drawing from, but keep in mind it takes space to shake those things around ( I think 7 is the limit) and that I picked the blanks because they are simpler, and visually easier to read.
Posted by Telecanter at 2:40 AM