An idea bubbled up in my head to use different kinds of dice on the same chart. Some indie games apparently use a mechanic that steps characters through the types of dice to change probabilities of achieving success in skills. So it seemed appropriate to call these Stepped Charts. 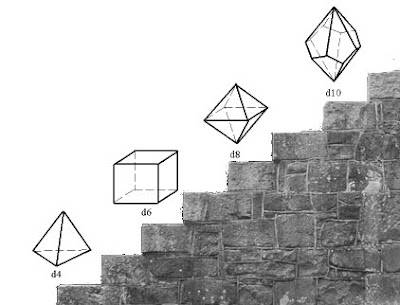 It seems like you might be able to use them for two things, but both have some problems.

If you have a chart of bad magical effects, say, and you order it in degree of badness. By using different dice types you can adjust the badness of your result. So, let's say your chart of bad effects looks like this:
If you want your super-duper evil altar to make really bad things happen when good players touch it you roll a d4. If you medium-evil altar isn't quite as bad you roll a d6, etc. Because the chart is so small, the effect is minimal, but the chance of rolling death goes down the bigger the die you roll.

I don't know how useful this is, because it's random, and just because you roll percentile, it doesn't mean your poor players won't roll a one. The concentrated effects are always possible, just less likely.

The other possibility I can think of for using Stepped Charts does deal with a kind of certainty:

If you roll a d4 on the badness chart you can never roll a 5. So, if we look at the chart from the other perspective we might segregate powerful/desired effects at the high end of the range.

Maybe your evil high priest has a Touch of Evil that he rolls on a table for. If you put the most devastating effects higher, you can limit the priest to smaller die types as he climbs in power. If death is entry 30, he can't even possibly kill someone with his touch until he works his way from d4->d6->d8->d10->d12->d20->d30.

The problem here is that uncertainty is still there; the EHP might have the chance of Death by Touch, but if he has to roll on a chart with 30 entries, it's only a 3.3% chance.

Maybe this would still be useful for mercurial domains like divination, or psionics, or wild magic. A psionicist growing in power would have new doors open up to her, new possibilities, but the powers of the mind would always be unpredictable.

Kind of a bummer it doesn't seem more clearly useful, but I thought of a different way to use charts that might be much more helpful to a DM in designing and playing on the fly. That next post . . .
Posted by Telecanter at 8:40 PM