I think you'll like this. Your players have a gone a different direction than you thought they might. You have nothing planned. What do you do? Or maybe you're stumped on a new dungeon level. This might be the key. It's more a one session lair, or sub-level, than true dungeon, but enough picking of nits. Here's what you do.

Combine my toss and trace map technique along with T.Fosters suggested encounters for one old school session of play: 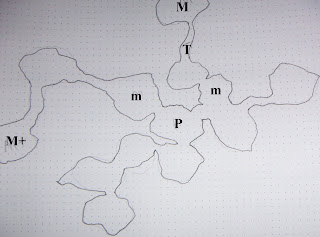 Don't worry about numbering the rooms, just place the results as quick as you can. For the above example, my M+=1 and my M=12 so I just slapped them down in what looked like the first and last rooms. The only other thing of note is the trap. I moved it from room 11 to the corridor between 11 and 12 thinking that would work better.

Okay, there are a few more details to think about. First, what a major vs. minor encounter is, is kind of hazy. As a shortcut, we might say a minor encounter is a level appropriate monster while a major encounter is a group of that monster or something that would normally be found much deeper. So if this were a first level dungeon I might make m1= a fire beetle and m2=a bandit guard and make M+= wererat in human form, and M=a bandit camp with ~6 bandits. But that's just off the top of my head.

Next, what do you do with traps? Well, it would be nice to have a list of smaller, not-super-fatal traps to just roll on, but until then, how about roll 1d6 and:
And for puzzles? Again, I think I'll need to make a list of at least 10 to have on hand. Foster recommends some kind of permanent effect on characters for old school feel. If it's an emergency you could just default to a magical pool and roll the d4 and d20 on my Hireling Traits Spur to see what permanent results occur from drinking.

Hope this is useful.
Posted by Telecanter at 1:51 PM