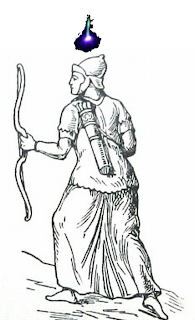 No one is sure if this phenomenon is a living organism, some by-product of intense arcane energies, or a thinness in the barriers between the planes of existence. Faculae are encountered only in the darkest depths. They appear hovering over the heads of living creatures. There is generally a single light that flickers from head to head in a group of creatures. There are tales of faculae even flitting back and forth between men and humanoids fighting each other.

They cause no direct harm to their host. The danger arises from the inescapable light of the facula. As bright as a torch, it is an ill occurrence indeed for a scouting thief or a wounded mage trying to find cover in a battle.

Dispersing a facula is a difficult task requiring magic.