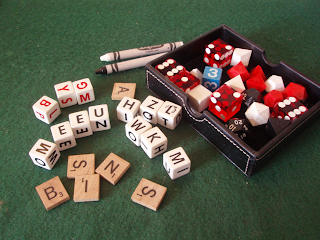 I read a forum post (can't remember where, sorry) about someone using scrabble tiles in lieu of miniatures. I like the simplicity and utility of this idea. I have been in the process of digging all my old gaming stuff out of storage lately, including my miniatures. My miniatures are 90% unpainted and don't have a lot of variety-- they'd be handy if a team of specially trained orcs attacked in perfect unison, using the same sword swing (that's what I get for buying the cheaper packs of duplicates).

I still think they are cool, but they don't live up to the hype for me. You can barely see the detail on them when they are set out on the table in marching order, and most of the poses available are flashy and not gritty enough for me (we're going down into a dirty, infested hole, what's with all the flowing robes and feathers?!).

So scrabble tiles . . . I like any solution that can use objects likely to be on hand. I happened to find a spare scrabble game and . . . yoink . . . I now have tokens to represent monsters and heroes. I decided to find out how many of each letter there are in a typical English language set so, for your edification:

Two things I learned from this 1) my set has four tiles missing! 2) we need more monsters with names beginning in E :) As you can see, there are enough Os for a nice Orc onslaught, Rats do well, Snakes and Spiders are okay, but alas, only one Kobold can attack the party at a time (you thought they were weak in groups!).

Oddly enough, I stumbled across an old Perquackey game going through my grandparents' things this weekend. I'd never heard of it before, but it's a word game that uses letter dice similar to Boggle. I don't know if these would be of any use for generating words or names, but they could serve as additional monster markers, the dice being taller than the Scrabble tiles. They could represent tougher things like Ogres, and King Kobolds (kidding about the last). I started tallying up the probabilities of rolling any particular letter with the 13 dice, but found it too tedious and stopped.

I read Lord Kilgore's post about using poker chips to keep track of time in a session. I like the idea. (I was bummed that the sand timer that was supposed to be in the Perquackey game was busted because I think a sand timer could similarly reinforce the tension for a minute long time limit). I followed the links in the comments to that post and found several more suggestions for counter/marker-type game tools.

Tracking consumables was the idea that popped out at me the most from all of that discussion. I had just begun wondering if there was a simple way to track missle weapon use. I read a post here that suggests making a roll to see if consumables are all gone or not. I don't think having to make a roll before or after every battle is really any easier than marking off 5 arrow hashes on your character sheet and it becomes so abstract that it actually loses the flavor of: "Uh oh, I'm down to my last 5 arrows." I think poker chips would work well for this, the most you'll need is twenty.

Thinking a little more about missles, a far as the issue of whether to allow for recovering them after battle, that doesn't seem abstract enough to me. In getting their one hit, a character may have shot off 5 arrows and they only have to record one as used, so I think it evens out that they can't pick up the few arrows they may have missed and not broken. Tracking that would be too fiddly with no gain. You can still roleplay it if you want: "as you are retrieving unbroken arrows you notice a strange sigil on the floor."