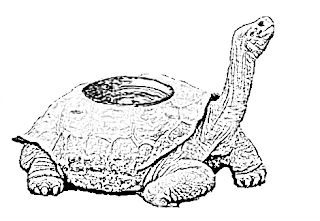 Exceedingly rare, these ancient creatures appear as large, mundane tortoises, with the exception of a bowl-like concavity in their shell. When filled naturally, water in the depression is said to function as a window into the future. Elves will often quest to find these tortoises before difficult decisions in order to peer into their divinatory pools. A side affect of the touch of the tortoise almost unnoticed by elves, is the aging of the one being touched by 5 years. Some sages speculate that grey tortoises do not, in fact, breed but that a fixed number maintain their existence through continual rejuvenation. On being encountered grey tortoises will slowly close and seek to touch. If attacked they pull into the safety of their shells. The shell and carcass is most likely very magical and valuable, although any elves learning of their destruction would be none too pleased.