I've mentioned detailing humanoid culture in my campaign world. I went into some of the background and philosophy behind why I would do that here. So here is a little piece of my artwork from about ten years ago trying to sort out the differences between the various humanoids. 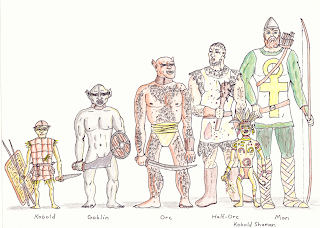 I understand DMs not wanting any orc babies; having humanoids spring straight from the darkness of the mythic underworld to plague your players. In fact I'm leaning more that way myself. I can't stand, however, if this lack of detail leads to the idea that humanoids are the default enemy that scales along in power with player characters. You may as well call them Humanoid HD1, HD 2, HD 3 etc.

For example, in 1e what is the difference between goblins, hobgoblins and bugbears other than size? I never got any feel or flavor of what hobgoblins or bugbears were except fantasy names tied to hit dice, so I cut them out of my campaign world altogether.

Anyway, in the picture you see some clues to the tribal culture of humanoids from my imagined world. Much of this culture involves raiding the settlements of other humanoid species. The greatest evidence of prowess is the capture of the young of a tribe more powerful than your own and raise them as thralls-- fighting slaves. The goblin in the picture would be a kobold thrall, the orc a thrall fighting for a goblin tribe.

Most tribes would have a central totem related to their ability to slay or invoke the power of said beasty. In the picture the kobolds are from the Fly Totem tribe.

I almost photoshopped out the human in the picture because he's so out of proportion, but thought what the hell, if I made things to my perfectionist standards I'd never post anything on this blog. So I'll leave ol' tinyhead as a humble admission of my room for artistic growth.
Posted by Telecanter at 7:03 AM