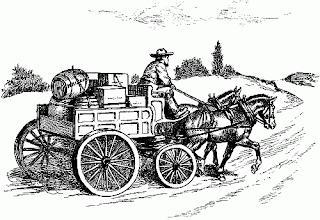 Since getting Swords & Wizardy I've been trying to recruit a few friends with no roleplaying experience. Because of this I've been thinking very carefully about how to streamline the process of playing, how to simplify.

After deciding on an encumbrance system, I wanted a streamlined equipment list. I read through many forums and looked at all the various equipment lists in game books I have. I've mentioned before how important I think the equipment list is. I wanted to capture that flavor I remember as a kid, the mystery and real world detail (this isn't a board game!) of all the items in the list. But I didn't want to overwhelm my friends who will also have to maneuver the new concepts of character class, weapons, and possibly spells. I decided to limit the equipment list to one page. I started with the list from Swords & Wizardry, revised from there, and added encumbrance information. That list can be found here as an open office file in case you want to do anything with it.

Vedron has a nice summary of real world detail on torches, lamp oil, rations, and rope I found useful.

But, even while making that list I was getting the feeling it was still too much. I needed something simpler. I saw several implementations of "Fast Packs" but I don't even like the term, it sounds like something designed for tournaments, and those that offered 2 or 3 numbered options remind me too much of ordering at McDonalds. Where is that old mystique I valued?

One solution that seems to offer the simplicity of the fast pack with some of the flavor and detail I value I found on Lord Kilgore's blog here. In a nutshell, his solution is all players start with standard equipment and then choose a few more items from a small list.

Below, I tweak Lord Kilgore's list to my taste. This allows me to choose a small core of equipment any sane adventurer would want, tally the encumbrance, and make a small list for my beginning players to choose from that captures some of that old time dungeoneering flavor.
This comes out to about 20 gold and 4 stones.

Choose four:
If a character chooses the four heaviest items, they will still be about the 10 stone limit for normal movement. As far as cost goes, I cut Lord Kilgore's option to upgrade from leather to chain-- if a player chose: chain, shield, two-handed sword and long bow, the total is over 180 gold! That's max gold for the core rules. I think I'll let them earn their chain.

I didn't list thieves' tools, holy symbols or spell books, because the classes that use them are kind of pointless without those things. If you feel this is unfair to the fighter you could grant them a shield as one of the core items.

Beyond the Black Gate gives an NPC and backstory for the selling of equipment packs, but again, it isn't quite to my taste. It reminds me of hearing about the early megadungeon with a turnstile installed, makes the dungeon more mundane if so many people are going there it merits selling standardized packs to them.

But the idea of backstory is great. And the idea of how valuable this gear is, is a factor that should probably be dealt with. I think my solution to both will be to have these on loan from a patron. I'm thinking a patron might be important in getting these beginners even headed into the sand box. After they realize what they are capable of and what their options are, the patron can ask for reimbursement for his gear and slip away, leaving them to decide if they want to go back into the dungeon or not.
Posted by Telecanter at 11:32 PM