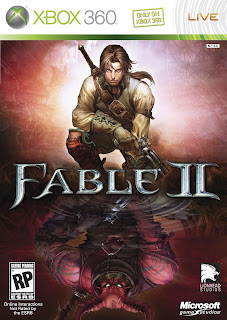 I'm back from the land of house-sitters. I played Fable 2 until the batteries in the controller went dead. Due to my unfulfilled desire to experience the D&D endgame :) , I spent far more time earning money than following the story and ended up owning every property available (yes, I'm the landlord of three damn cities!) and half a million in gold pieces. Fun, huh? . . . umm . . . no.

When you can't play D&D because the groups you're in drift apart, or you can't find anyone that knows something besides WoW as fantasy gaming, you don't have many options. I have a long, conflicted history with fantasy computer games (yes CRPGs, but come on, there's no roleplaying involved).

Some games do a better job of satisfying the various things I seem to want from gaming than others. I have fond memories from Baldur's Gate 2 of having a powerful mage hunting liches hidden throughout the city. Hear that developers? Not only do I not remember the main plot of the story, but I remember thinking of it as a hindrance and wishing I could do more of what I wanted-- that most dangerous game, lich hunting.

Morrowind probably came closest to scratching all my itches. I didn't get a chance to play it much because of real world happenings, but I remember the joy of creating my own levitation spell and floating lazily above Where I Was Not Supposed to Go, monsters that would have easily killed me, drifting past beneath me.

Are you seeing a trend? I want to make choices. I don't want to be an actor in your finely crafted story, I want to make my own story. So, now I get Fable 2 which:
Spoilers below

Strips you of everything you have; shaves your head; forces you to make "moral" choices where the good choices don't affect the plot but lose you experience points; puts you in the most difficult battle up to that point-- without your gear-- so you'll most likely be scarred (permanent in the game); and then releases you back into the "sandbox" ten years later!

I know there are difficulties with designing a fantasy computer game and that the only real solution is to have a human brain looking back at me saying "what do you want to do now?" But really? After how many years of computer gaming and still this is state of the art: you follow along in a story where your actions make little difference to the overall outcome of anything? Do people like these games? Or are they like me, playing them because they are all that's offered?

I know it's a complicated problem involving hardware constraints, developer investment, and even player expectations, but it seems so evident to me: if you give players choices, story will rise up like a flame; if you force story on players, choice ceases to exist.

This turned into more of a rant than I intended, and I realize others have probably said all of this before and better. It's just I've been out of the gaming loop for a long time and was surprised to find a game released in October to still be pulling this stuff. It also seems applicable to this blog, because choice and railroad-free gaming is why I like the old school philosophy.

It seems especially applicable right now, because I am currently planning for a first gaming session for three people with no roleplaying experience whatsoever. I'd originally intended to have a patron give them gear, give them a quest, and get them going in a dungeon. I didn't want these players' first experience with roleplaying to be, "Okay what do you do?" I wanted to give them training wheels, so to speak. Get them down in the dungeon and experiencing the thrill of exploration and hard choices. But now, after having such a strongly negative reaction to the railroading of Fable 2, I'm going back to the drawing board. I'll probably still give them a patron and gear, but I want there to be real choices involved from the start, even in this first introductory adventure. It may be difficult to give them choice without them being confused, but I think it's important and I'm glad I'm thinking about it.