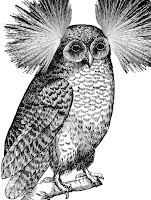 This bird looks much like a small, dark-grey owl, except for it's finely feathered double crest. On encountering a potionguide, it will generally put on a display-- riffling its crest, unfurling its wings-- and then take flight a small distance away to repeat the process. Its intent is to get onlookers to follow it and to travel towards its eventual goal-- a cache of potions. Potionguides can sense potions through doors, through walls, even in locked chests. If any obstacles appear in the path toward their goal, they will hang back, only to continue leading once the obstacles have been dealt with by those they guide.

On achieving the potion cache, the potionguide will attempt a surprise attack on anyone with a potion in hand. Using a flurry of wings, its aim is for the potion to be dropped and shattered, where it can lap up, with its broad grey tongue, the magical liquid it so desires.