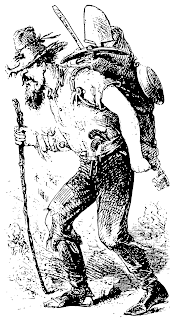 I've spent more hours pouring over the equipment list in the 1e PHP than any textbook. Partially because I was making more characters than I was playing, but also because the equipment list was evocative of what adventures might await-- why was belladonna on the list, and what would a pound of garlic do to a vampire, really? I only had brief encounters with grognards in my early days of the game so I didn't know what one was supposed to do with iron spikes and 10' poles.

The choosing of equipment reminds me of the Vancian magic system; you need to make choices before the adventure based on what you expect lies ahead, and you can't change your decision later when it is convenient.

Of course this only holds if you are limited in what you can carry and choose. Ahh, encumbrance. A prime example of trying to add choices to a game without adding too much complexity. The idea of encumbrance is true to the essence of the game-- just as you approach the submerged temple of the slime-worshippers your last torch starts to flicker-- but in 1e turned out way too fiddly-- how many coins does a potion way again?. I'd wager that most people hand wave encumbrance, but then you lose the hard choices of what to take and what to leave behind.

In my own campaign I tried something more video-gamey with sacks and backpacks broken into squares, but I think it was still too fiddly. Now for the solution that more than anything crystallized my desire to blog: Delta's post on encumbrance.

In a nutshell, he raises the granularity of the system, so that rather than working with pounds we work with 14 to 15 pound "stones." This abstracting of detail seems brilliant and obvious in retrospect; how many game systems have tried to add complexity to the combat system of D&D only to find the elegance in its abstraction? It simplifies things enough to allow us back our player choices based on weight and carrying capacity with the added flavor of an imperial unit.

This is exactly the kind of rule I want to focus on in this blog: one that reduces complexity while adding choice and flavor to the game.
Posted by Telecanter at 7:54 AM