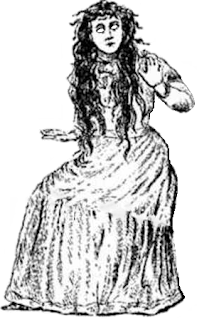 Appearing as a girl or young woman, pale and eyeless, stumbling through dark passages, a blind Agnes is an ill omen for those that see her. Anyone close enough to see the white holes of her eyes will have their own eyes stolen by Agnes. She will gain her victims eyes and with them sight. Once she is able to see, blind Agnes will attempt to flee.

The poor soul that loses their eyes to blind Agnes will still see, but through the eyes set in Agnes face. Their vision will follow wherever Agnes goes while they must negotiate their actual surroundings sightless. Stories tell of men crying out about wondrous treasures only to step unknowingly off of ledges to their death.

There are at least two ways for the victim of a blind Agnes to regain their sight. The first is by waiting, after a matter of hours they will regain their eyes and see as normal. The second is by slaying the blind Agnes. But as she falls dead, her eyes see things no man was meant to see, and a victim that regains their sight in this way is often reduced to whimpering and moaning of the horrible sights they were forced to witness.