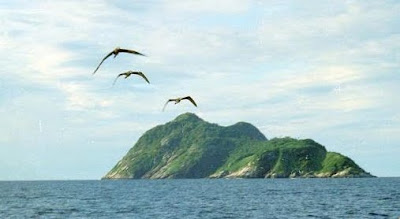 I've always wanted to do a Dawn Treaderesque campaign with pcs hopping from fantastic island to island. Ilha de Queimada Grande off the coast of Brazil would be the model for one of them:

"Researchers estimate that on the island live between one and five snakes per square meter."

"The lancehead genus of snakes is responsible for 90% of Brazilian snakebite-related fatalities. The golden lanceheads that occupy Snake Island grow to well over half a meter long, and they possess a powerful fast-acting poison that melts the flesh around their bites."

I think there would have to be something astoundingly valuable on that island to get the players to brave the snakes.

ps: What's with Brazil!? First a fire tornado then an island of deadly snakes that I've read about today. They need to channel the tornado towards the island, haha.

via Neatorama.
Posted by Telecanter at 6:12 AM