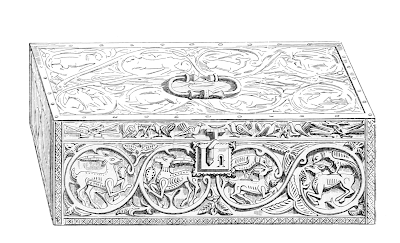 Work is busy these days and that means I don't have the mental energy to go as deep into ideas as I like or respond to your comments in a way they deserve. I thought I might look back over last week's posts and add some comments and further thoughts before we move into another crazy week.

Monday I put out the idea of sharing NPCs in the way we share artifacts and relics. Zak offered up a great way to do that utilizing random tables already existing in the blogosphere.

Two thoughts: 1) I love the way the effort put in to make those charts now allows us to go further, building on them. By sharing we can all get something even cooler than our own individual efforts (which should go without saying, but hey we live in the age of intellectual "property"), 2) I think there might be more meat on the bone of what random charts you might plug into the shared NPC. Zak's "Hidden Traits . . ." chart is great because it hits all the notes, but it doesn't allow for customizing the way the DMG charts did. You might make up more specific charts of Shameful Secrets, or Phobias, or whatever strikes your fancy. If you make it and we know it exists we can offer up NPCs using this common language.

Tuesday I asked what the purpose of the art inside modules was for. I know it sounds lame, it's to make it look nice. But when I ask you all lame questions I usually get fascinating answers. Lot of good comments here, two ideas that struck me as notable 1) Trollsmyth mentioned Raggi using art as tone indicators to a DM. So, if you intend your module to be gonzo, and insert hyper-realistic art, you may be working at cross-purposes, and 2) Daen Ral Worldbuilder, offers up the idea of art as markers. Modules do serve as tools at the game table and if you can help a DM know where important chunks of the information begin and end, that seems very important to think about when placing your pics.

Wednesday I cogitated on the limitations we have in applying imaginary effects to player characters in the game world. There are some interesting comments there about how to evoke reactions from your players, but I was more interested in clever/innovative ways we might use the system to let us do more. Yes, we can certainly work to evoke feelings of fear in our players, but I don't know that I can make them feel charmed or feel the difference between being asleep during a combat or being petrified.

I forgot to mention in my post that there is another category of effects that I try to use, that of affecting the player character's appearance. Aging, height/weight, hair/eye color, while having no in-game mechanical effect, do seem to matter to players. Which is really an old idea, with the idea of gender-exchanging magic items.

So, no real progress here. I think the three possible areas to explore that I list at the end of that post might yield something new, but that is for a different time.

Thursday I posted about Snake Island and mentioned I think an island hopping campaign would be fun. Not much new to add here either, but I was thinking about how it would be cool if one-page island modules included the island profile; what it would look like as pcs approach from the sea. So, for example, volcanoes would be smoking, Snake Island has tons of birds (snake dinner), and some islands might be just austere spires of rock. It would help players decide if they should risk landing or not.

Friday I posted two word NPCs and invited you all to participate. I love doing that. Some of mine are silly, but some I found really intriguing. The first four especially. I've always been fascinated by the lich. I've long had thought of writing fantasy fiction and one idea was a sort of lich hunter, who hunts to find the secret of avoiding mortality, a sort of fantasy Gilgamesh. The idea of a lich gilding and bejeweling the hardened flesh of his/her corpse is creepy to me. In fact, I think I've decided to try and offer the first two as NPCs à la Zak's method.

Thanks for all the great comments. Here's to a good week.
Posted by Telecanter at 9:40 AM