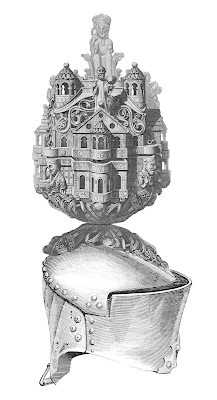 Scholars have long speculated on the fabled city of Commissum. Its location and the nature of its inhabitants lost to time, some doubt its very existence. But some few, rare manuscripts speak of it with certitude, its strange inhabitants always somehow fantastic-- invisible, ant-like, or tiny-winged fey folk--its promise always of great personal power to those who find it.

Commissum is, in actuality, a great helm with an intricately-shaped city in steel mounted on its crown. Those who don the heavy helm will be granted a great power but there is a price. If the city tips past its horizontal plane the wearer will suffer ill effects. And even if a wearer manages to keep Commissum steady, there is a price to pay for its power.

Design notes: I thought of this while up in the mountains, but after Jeff posted the artifact challenge, this seemed perfect-- because I have no idea what benefit having a tiny, living city on your head might give someone-- I just liked the idea. This way YOU can decide :)

I couldn't resist giving it a prime power, 'cause that's what artifacts are for, right? Give me a day or two to come up with the other lesser artifact required by the rules of the challenge.

If you have any suggested powers for this let me know, I'd love to hear them.
Posted by Telecanter at 12:16 PM