So, I left off with the idea of a binary system of dealing with how much crap characters in adventure games can carry: little enough that it doesn't matter, or enough that they can barely carry it.

Again, this is an abstraction. If you don't have a problem calculating movement rates for all pcs/npcs, then that's cool. I personally don't want to deal with calculations if an abstracted system will give me similar results-- namely the feeling that people have limits to what they can carry, and that because of this they'll have to plan ahead if they expect to find heavy treasures, or else make hard decisions about what to leave behind.

Now, I think a simple addition to the binary system would help along those lines and not cost much in complexity: if you have at least one slot left in your pack, it doesn't affect you in any way, if you have a full pack you can't run or jump.

I'd have to see how this works in play, but I think it might prevent the binary system from feeling overly simple. I'm guessing it would put pressure on players to always have a little room left in their packs.

If you wanted a little more grit you could give pcs with full packs a -1 to all combat rolls (thanks Dan), or require them to have to make the standard rest breaks twice as long / twice as often (thanks anarchist). Both are simple enough that you could probably get away with using them without confusing players or slowing down play.

Okay, what if their packs are full and players still want to carry something? I don't have a brilliantly elegant idea for this, I was just thinking pcs could carry up to their Str in 10s of pounds for a distance of their Str divided by 2 in 10s of feet. So an average adventurer with a full pack finds a bag of coins and wants to carry it with her. She can carry up to 100 more pounds, but only 50 feet. So she could drag it or schlep it 50 ft and then have to rest, huffing and puffing.

Someone with exceptional Str would be able to carry an additional 180 pounds 90 feet. if that doesn't sound like a lot, remember that I was going with an average pack weight of 45 pounds + 4 x 7.5 for exceptional strength. Which put the total weight at 255 pounds. That isn't too far off of the Swords & Wizardry maximum limit of 300 pounds.

How many of these over-encumbered carries can a pc make? Again, something I'd have to try in-game to see how it goes, but I might just let them keep doing one after another, except the noise they make grunting and continually dropping the weight would call for a wandering monster check each time.

The cool thing about having an inventory list based encumbrance is that you can tailor a character sheet to be ready for the assumptions of your campaign. If all your fighters start with leather armor you can cook that in to your sheet and have it ready to go. If all your mages have to carry extremely heavy spell-books, same thing.

Here is my workmanlike draft of how I might incorporate my starting equipment with this system: 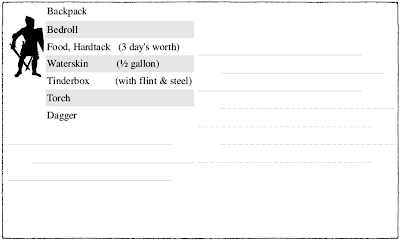 What everyone gets by default is listed. I currently give them a choice of three other items which can be entered on the first 3 lines below the default gear. That leaves them three lines for junk they find in the dungeon, more if they're strong.

This could actually simplify my starting equipment down to "Here choose three things off this list."

Since most of my players like hirelings and end up with at least 2, it would probably be a good idea for me to work up a page similar to the draft in the last post. But it would have an inventory list for one pc and lists for 3 hirelings.

Bags of holding, mules, Tenser's floating discs, could all be easily worked up into sheets with a certain amount of available slots too.

Anyway, the details can be worked out. I'm more excited about the way ignoring encumbrance effect on movement rates could streamline play.
Posted by Telecanter at 1:17 PM