The Leaden Head of Aristoclea 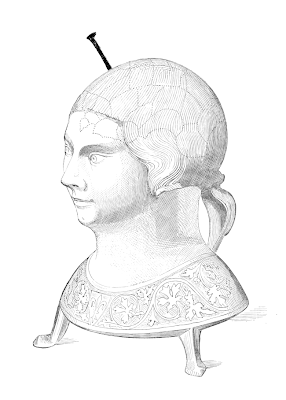 When a great Eastern Emperor came to the philosopher-priestess Aristoclea for relief from pain accompanied by terrible visions she told him that she needed a week to consult the oracle and meditate on a remedy. She stressed that during this week he must rest and contemplate his place in the order of things. After a few days the Emperor felt better and decided to celebrate, throwing lavish parties and going hunting with an entourage of hundreds. It is said that the crude solution provided by Aristoclea is in fact the consequence of his disobedience.

The Emperor's prescribed aid was a crude leaden head with approximately thirty small areas marked out upon it. Upon the onset of suffering he was to hammer an iron nail into the area most afflicted. At the end of the day the nail would work its way out of the head's mouth to be used again.

At first use, the Emperor found not only did the pain abate, but that he was granted a small boon for a day. Unfortunately, there was also an ill effect. Worse still, using the head 3 days in a row brought on additional ill effect so that the cure was little better than the sickness. Frustrated, the Emperor threw the head into the sea and retired to his palace to live in quiet and complete darkness.

Hammering the nail into a particular spot will clear any charms, geasa, glamours, or insanity. It will also provide a Type I and Type III effect. The benevolent effect granted will always be the same if the nail is driven into the same spot, but the malevolent effect will be random.