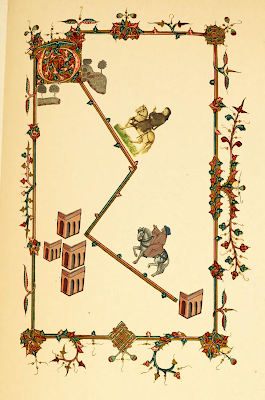 I don't think I ever posted this. It was the map found after much effort in the depths of an abandoned nunnery. It shows a path three days travel by horse, past the ruins of an ancient city, and into the hills.

Of the two characters that made it to the maps' destination, only one made it back. Neither even knew who had made the map or what it led to.

I accidentally slipped when talking with one of those players today. I said something like "Oh, you mean the map to the tomb of St. Cecily?" And he said "That's where that map led!?" Whoops.

Anyway, I made it by chopping up bits of I-don't-know-how-many illustrated manuscript pics and pasting them together. I like the way it came out, although I wish I'd found a better representation to use for the ruined city.
Posted by Telecanter at 7:22 PM