The thing about a list based system of encumbrance is that you can use any lined piece of paper, index card, or scrap of napkin you've scrawled some line across. Very DIY. But, if you want something a little ritzier to give your players I made another sheet that might be more generally useful.

I may be too conservative on my total weight. So, going with Swords & Wizardry's 75 pounds with no movement penalty, I've made a new encumbrance record sheet. Going with my previous post's 7.5 pounds per line, you have 10 lines. Going with the system of a new line for every 2 points above average Str, there are for dotted lines beneath that strong pcs can use and others ignore. I put one hireling on. Pdf here. 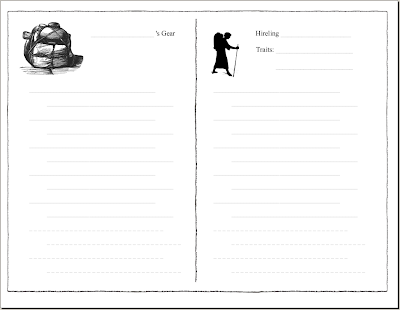 Looking over S&W's weapons list, most entries are either 5 or 10 pounds. So, it might be more convenient for you to make the lines represent 5 pounds each. That would mean this record sheet has too few lines. But I think 7.5 per line would probably work out better. Hopefully for every spear a character carries she'll have a dagger and they'll balance themselves out.

Choose How Many Lines You Want

I wouldn't worry about it too much, the point is to find a number of lines that feels about right to you as a DM. And, of course, there's always room for rulings if player's abuse the system. I remember back when I was an embryonic gamer, my DM's DM had a player that had so many magic swords they joked he wore them like a skirt. Yeah, that would be too much. Ten suits of chain or something would be crazy, but I want to be as hands off as possible and let the lines do the work where they can.

Coins As An Exception

So . . . is a backpack full of 300 gp one "item"? I would say, no. Everything is an item until you get to coins and then they slop across the lines. You fill all the containers you have, adding their weight to the total.

But if you are using that standard D&D 10 coins equal 1 pound, then every two of my lines is 150 coins. Pretty easy. You would probably want to have some standards worked out for container weights/capacities (does any one have a list of these already?). The max our poor hireling could carry is 750 gp. But hey, that's a good profit :)

Update: I think need more coffee. I probably should have put spots on the pdf for the chracter's max load possible and how far they can carry it. Maybe later.
Posted by Telecanter at 9:22 AM