The Heist, The Con, The Special Mission

Take the idea that D&D can be heist-like, add in the idea of a wary location where an alarm can be raised, a clock, and the idea that at every tick of that clock something might go wrong, and you have the recipe for a badass subgenre of D&D.  Think Ocean's 11, The Sting, The Dirty Dozen.

This Friday may be the last I get to play with some of my best and nicest players (one couple is moving to Arizona, one to Indiana).  I thought it might be good to end things with a bang-- A heist to free some prisoners and all the coin that was confiscated from them.

So, I've tried to assemble all the great ideas from the bloggers above into a simple system.  Think of this as a draft.  Here's a pdf. 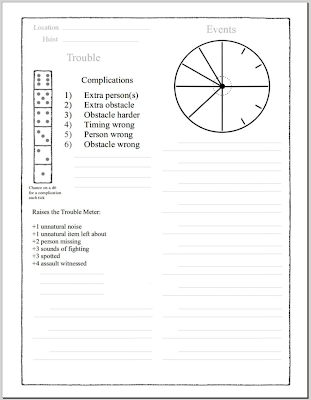 The Event Clock is used to schedule events like guard changes and executions.  The Trouble Meter goes up when PCs do things that draw attention to themselves.  You can use paperclips to track movement on both of these.

The pips in the Trouble Meter represent the chance that complications occur.  So, for example, if PCs drop a piece of clothing, the chance of something going awry goes from 1 in 6 to 2 in 6.  If the result says there's a complication, you roll on the chart to see what kind.  I left them general and tried to think of the most obvious/important.

If a roll came up "Obstacle Harder" you might decide a wall PCs knew about is actually taller than they thought. Maybe they couldn't see its base from where they were observing.  I realize it doesn't make logical sense that leaving out a piece of clothing would make a wall taller, but I think it models the way bad breaks or sloppiness can snowball.

I also think this is a good place to use the Jenga mechanic.  Any time the Trouble Meter is incremented all of the team involved need to pull a block.  You  could actually disregard this if you wanted to simplify things, but I like the way it will make the likelihood of general alarm more apparent to players.  Plus it's tactile and dramatic.

Should there be ways to lower the Trouble Meter?  I'm not sure.  I like the idea of tension building and building.  If you did allow for it, it would probably be based on context and require a DM ruling.  For example, the guard who spotted you is neutralized before he let's anyone else know.

I tried to leave spaces on the form for you to adjust these things to your taste.  Now, the hard part is setting up the detailed system that the players will attempt to crack.  I want to brainstorm here what kind of things I might want to include in a heist scenario:

Teams: players separated, vulnerable and dependent on each other succeeding at their sub-tasks.  What can I include that would require teams?  Raising portcullises, multiple objectives, distractions of patrols required to stall them.  Chgowiz had a post recently that suggested handling multiple parties by switching focus at cliff hangers.  I think this might work, although it would give players in tight spots more time to cogitate on solutions.  Which could be good if the goal is to help them be awesome.

Specialists: Assemble a team.  Determine what needs to be done and get the best for each job.  This might apply less to us because all the PCs will presumably be involved but they might hire help.  But, then, parties in D&D are already very team-like.  Thieves are the obvious example; forgers; high charisma persuaders; MUs with sleep, charm person, knock; Clerics with command, hold person, sanctuary; shape-shifters; the invisible.  The DM should probably design it so that some obstacles are obviously suited to certain specialists

Interesting Environment: Having to dig a tunnel under something, swimming in the sewer, scaling walls, hiding in wagons of goods, disguised as common passers-by, smoke, darkness, fog.

A Time Crunch: A limited window, a one-time chance to make this happen.  But not too rushed because preparation, scouting and planning are important parts of the genre.  Maybe give the players one in-game week to do all this and then they get one shot.

Predictable Systems: For complications to work, they need to be exceptions to an expected routine.  For planning to matter there need to be things that can be learned with some certainty.  Guard schedules, lights out, meal times, deliveries, vistors, local weather patterns.

I haven't play tested this but, hopefully I'll get the chance tomorrow.
Posted by Telecanter at 4:18 PM