I want to highlight some cool ideas from other blogs that keep resonating in my head: 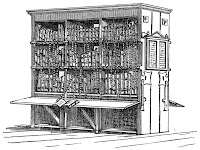 This wasn't Oddysey's intention, but the way she worded her post was still the spark of the idea: A magician casts a spell that summons something bulky, awkward, and incredibly useful at that precise moment.  What things would you want to summon? An alchemical lab, a troupe of actors, a font, a barge, a forge?

2) Hirelings Shall be Splintered
-C's idea is actually more sophisticated with its options of Strong and Weak forces too.  Go read it.  It seems like it might be a more elegant way to get the same benefits of the Shield Wall house rule. I may try this in my campaign.

3) Everything's a Dicemap
If you've been following The Nine and Thirty Kingdoms or bought Vornheim you know about dropping your dice to generate things.  Tsojcanth takes it a step further and drops dice on campaign materials or maps.  The idea is to generate rumors, but I think it could be for more than that-- locations, spell effects etc.  Yeah, it's like the old-stick-your-finger-in-the-Bible-to-find-a-relevant-verse trick, but I haven't heard people taking D&D to this level of improv and I find it exciting.

4) Toss and Trace Islets
Here's one from me to try to add to the conversation.  Take a handful of d4s, throw them on hex paper, and trace outlines.  The result of each die is the topographical height.  Adjust topo scale to taste.  Just like the method I suggested for campsites, but now usable for generating quick and dirty islets for the Sea of OS'R
Posted by Telecanter at 1:12 PM