Spawn of Endra asked how I found some of the pics I do. I posted about a year ago about that.  It's been so long that Archive.org changed the interface of their online reader.  But for the most part I think the steps hold up.  A few more thoughts, especially if you're bypassing OBI and going straight to Archive.org:

Finding Cool Stuff is Mostly Just Luck
If you want to find generally interesting pictures the best way to start would probably be to search for "Fairy Tales" or "Arabian Nights" in the search bar of the texts section.  A lot of the great illustrators did work in those spheres and they are subjects that are far more likely to have illustrations.

If you want to search for something specific like a knight or a shield, you'll need to be clever with the key words you use and get lucky.

For example, Gorillas were apparently unknown to Westerners until around 1860, with scientific study not taking place until the '20s.  Good luck trying to find a nice gorilla illustration in the public domain.

You can improve you specific search luck if you can come up with keywords in different languages that's good, there are a bunch of great French, German, and other language books up.

Tracing a Pic's Source
Theoretically, if you like a picture I post, you can find more like it.  I try, as a practice, to leave picture file names as I found them so you can figure out the original source.  (In a perfect world I would post source and artist information for every picture, but that seems so much like work I doubt I would post much).  So, for example, the first pic from the last post is called:

What do you think I was actually searching for? : ) I'll give you a hint: its a creature in OD&D.  Hopefully, you can figure out from that info that the book is: The Giant Crab, and Other Tales from Old India (1897) and there might be other illustrations in it that you like.

Search for Artists you Like
You can also look on the title page to find the artist listed as W. Robinson.  That's too common a name to help, but a search on Wikipedia brings up W. Heath Robinson. Put that in the search box and Bingo!, a list of books to check out.  ('Course this only works if the uploader was diligent enough to tag the illustrator) Searching through all those, I found a couple quirky pics: 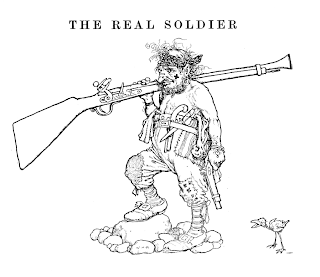 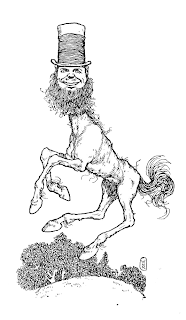 But check this angel with five-o'clock shadow out, it appears to be by his brother Charles: 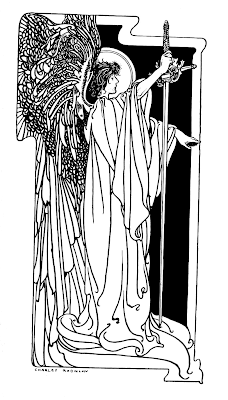 And, coolest for me, I found a nice silhouette of this "very distinguished lobster": 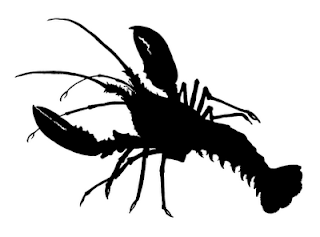 If it were a Crab, the cyclical serendipity would have been perfect, but it's still pretty cool.

Enough of that.  One more tip:

Google Sucks
They kinda do these days.  They go to the trouble of digitizing thousands of books and then upload images so contrasty I don't know what people even do with them.  The illustrations are too jacked up to be useful to me.  Project Gutenberg is a great project but doesn't handle images well.  MSN or any named university claiming a digital upload means it will suck.  Also, the same books are often scanned and posted multiple times, which, inexplicably don't always show up in searches. 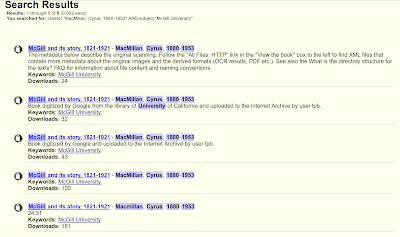 Pop quiz, in the image above which link do you follow to find good illustrations? First one is MSN, no.  Then two by the Google, nope.  The last two should be okay.  I gravitate to the last one with more downloads.  This seems trivial, but if you are looking for art on Archive.org it will save you hours and hours.

Hope that helps.
Posted by Telecanter at 5:20 PM