If you don't know about http://www.symbols.com/ you should go poke around the site.  I remember this being an early reason to be interested in the web for me.  I really like the way they've organized the various symbols by their symmetries.  Anyway, I was tinkering around with a possible world map and as per barrataria's suggestion went looking for some vague symbols I can put on it to be fleshed out/ interpreted later. 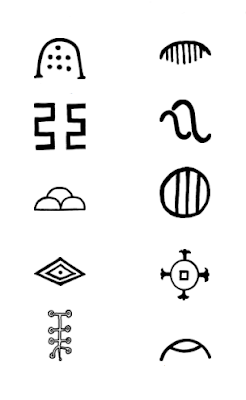 I just flipped quickly through all the symbols and pulled some that were visually appealing to me.  I may look closer at the meanings later as possible spurs to their interpretation.

Some I'll just use once.  A few I think should appear multiple times.  Also, I'll try to do them in different colors as if they were added to the map at different times by different hands.  If you were looking at a map, which of the above would you want to go check out?
Posted by Telecanter at 1:19 PM