I got the chance to play via Skype with ze Bulette and Risus Monkey last night.  The post title is not describing the results, but the game we played.  I want to thank them both for the opportunity, especially Risus who had three hours more sleepiness being on that other coast. 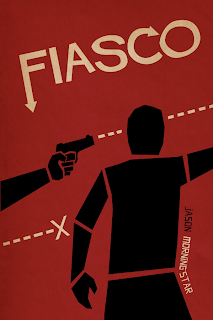 First, I'm not a fan of Skype gaming.  The picture I get is grainy, and choppy, we haven't managed to conference call with it so you can't see everyone at the same time (it seems this should be a basic technology by now, come on imaginary invisible hand ;), and, any communication technology that garbles crucial sentences isn't very good at its job.

Anyway, that aside it was fun.  Fiasco is a one-shot story game where you replicate the plans-gone-wrong genre typified by movies like Fargo and Burn After Reading.  Random rolls determining relationships and objects connecting players help everyone develop characters and start solidifying a sense of story.

Starting out, it seems you need to leave a little slack to allow for things to develop, as well as allow other players room to be creative.  When it's your turn there are scenes that you can choose to either set up or resolve.  This is crucial because if you get stuck you can throw the responsibility of what happens next back at the other players and then just resolve whatever they set up. 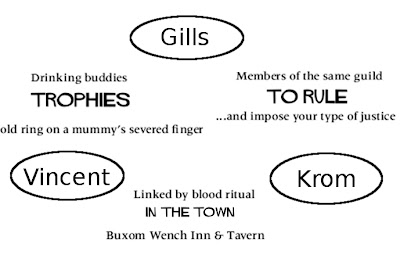 Scenes will either go well for the player whose scene it is or not.  Accumulation of these successes and failures will help determine the outcome of the story, although the tendency is for everyone to be screwed.

We played a short form of the game.  At its best I think the funny flashes of creativity were the same as those when something unexpected comes together in a D&D game.  For example, when presented with a way to a) affect things in the past and b) clay that could become anything, one of my players made a tentacle for the one-armed fighter in our party.  I could have never predicted that, it was cool, creepy and funny.  Actually, a better example would be when two players riff off of each other.  If, for example the one-armed fighter had suggested a replacement and the other player said: "No, I know, a tentacle!"  Fiasco feels like it has bottled that flash of collaborative insight.

It achieves this with simple, clever rules.  Although, I get the sense if the rules were a DIY product and not something meant for polished publication it could probably be represented on one 8x11 page.

I think the intention is for all the scenes to be role-played.  I haven't played any other story games, but I think Fiasco can get away with this because it doesn't take itself seriously. I imagine a serious game would be some combination of terrifying to try to perform in and tiresome in its pretentiousness.

I suppose its greatest strength is that it zeroed in on the perfect genre for that kind of ironic, light hearted play- the fiasco movie.  Although, it does offer "playsets" which allow you to set your story in other genres such as postapocalyptic and fantasy (which we used).  This seemed odd to me.  Not that you couldn't make a fantasy movie as a caper-gone-wrong.  Or a post-apocalyptic movie about irony.  But when the "Fallout" playset lists The Road as a possible source of inspiration I'm thinking the maker of that playset is losing sight of what makes Fiasco Fiasco.

In conclusion, I wouldn't mind playing again.  It does distill out one of those things that makes roleplaying games awesome, and awesome in a way that is different than other games.  But I think that is just one of several aspects that made D&D awesomely unique.  Fiasco would not satisfy my exploration itch, or my making progress itch which adventure games do so well (I wonder if other story games are designed more to do those things).

And that is a lot of blather from someone who has played one shortened game of this and perused the rules.  Feel free to correct me on anything.
Posted by Telecanter at 10:40 AM