Like every productive adult I spent the holiday weekend in a video game-induced coma. The game this time was an old favorite from 2004, Rome: Total War. It seems to be a popular series so I'm guessing you've probably played it. I would play it much more often (or have become tired of it by now) if I could get it to run on Linux. Alas, I have to play it on my brother's Windows box.

The Good
There may be other games that handle the different levels of abstraction in strategy and tactics as well as RTW, but I haven't seen them. In this game you manage your domain on a strategic campaign map and when battles occur you zoom to a 3D, realtime battle. It reminds me of Delta's Book of War play posts: you stay at the higher abstraction level until you absolutely need more detail then you zoom to a whole new subsystem of mechanics. It works well. 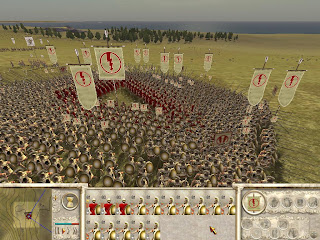 I love how playing different factions feels very different. Numidia with its cavalry heavy units is a different challenge than Greece and its hoplites. The desert regions have camel troops, the steppes have scythian horse archers.  Elephants are hard to come by if you aren't one of the few factions that can train them yourself.

The battles can feel real when you have thousands of troops affected by morale, terrain, the proximity of your general, fatigue.  Things can go in unexpected directions.  Imagine having a line of phalanxes attacked from both sides and somehow, through deft maneuvering of archers and cavalry, managing to pull out a win. 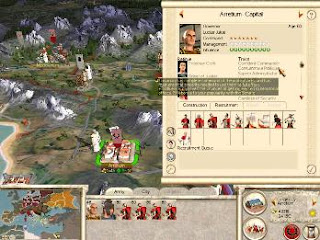 I love the way your generals are actual family members with traits and their children become the next generation of children.  It seems important when your 40 year old drunkard finally has a kid.  It makes it feel like time is passing in the game as these characters age and die.

The Bad
The game is pretty stupid on the historical accuracy front to pander to a greater audience.  Namely the Egyptian faction is given units that are centuries out of date because the average Joe thinks of chariots and pharaohs when they think of Egypt not the Macedonian descended rulers they had at the time of the game's campaign.  Other goofy units are available, Rome's gladiators, barbarian witches.  I tend to just ignore them and never train those units.  So this doesn't affect play too much.

The AI, like most, is stupid.  Nothing like sending one unit of cavalry behind a huge line of phalanxes and see the enemy jockey those troops around, spinning this way and that until they are all exhausted.  Or to have enemy general charge directly into your hoplites (you'd have thought they would have hard coded against such a horrible weakness).  You have to go up against armies twice you size or with tough units like elephants to really get the blood pumping.  I play factions surrounded on all sides for fun as they are always under the gun with tiny armies.

Diplomacy, which seems to add a layer of depth is useless.  The computer will attack you whenever they feel strong enough whether you are an ally or not. Which leads to:

The Ugly
The assumptions underlying the game world are so wrong as to be almost evil.  Essentially, everyone always attacks everyone if they are strong enough.  The only way to be safe is to conquer the world.  My brother says "yeah, but it's not Rome: Total Trade."  That's true, and I understand that they want the game to provide opportunities for epic battles.  But it actually undermines the play experience after a while.  When you know, for example, that alliances mean nothing it cuts out the drama of trying to rescue friendly cities.  When you know that you will be attacked from all sides for the whole game it cuts off any chance of being surprised, or at being shocked because you were betrayed.  Exterminate everything. Tiresome.  Sometimes I want to build my roads, build trade routes and live in peace.

Another fundamental assumption is that as a city gets larger there are only two results that will eventually occur 1) it will get overcrowded and get the plague and have its population decreased, or 2) it will revolt (see, your not even safe from your own people).  Your only options are to fill your cities with ever more military units to keep control with an iron fist, or decrease your populations by pumping the citizens into ever more military units.

Obviously, I find the game still fun to play, but as usual, I feel if it were tweaked just a little it would be exponentially more fun for me.  (If only I had a few million dollars of seed money I think I could produce some pretty good video games.)
Posted by Telecanter at 9:37 AM