Into the Black Pylon

About a week before the Battle of Nidus a strange black pylon appeared north of the city.  It was a truncated pyramid of black basalt.  There was a square opening 6 feet off the ground. Our intrepid adventurers were hesitant to bother it, but curiosity got the best of them.

They climbed up into the entrance to find that the 60x60 pylon was hollow and, in fact, opened down into the earth.  It had 10' wide tier of smooth, solid basalt and then fifty feet down another and then an open shaft.

They made sure to tie off their rope to a sapling and paid a beggar boy to watch it.  The party then began cautiously descending into the darkness. Once in the central shaft their lantern revealed openings in each wall of the square shaft.

Athydas the mage was lowered into the shaft and eventually swung into the entrance closest to the party.  He saw the shimmering of broken glass down a 30' hallway.  Cautiously proceeding he found a medium sized circular room, the floor covered with broken glassware and six iron pipes with levers on the wall.  He tied a rope to one lever he could get a good angle on, backed down the hall and pulled.  A syrupy, brown, bubbling liquid oozed out onto the floor.

The party came down into the room one by one and experimented for some time.  They found that each pipe released a distinct liquid.  They also found some unbroken vessels on the floor and filled them with equal portions of the liquids.  Some timid taste testing revealed the liquids to have magical properties.  After unsuccessfully lobbying the party to leave right then and sell their bounty, G sent Janis back to Nidus to buy vases to fill with more of the strange liquids.

The other three opening at this level led to similarly shaped, but empty chambers.  The party preceded down to the next level which also had entrances on each of the four walls of the shaft.  The first Athydas entered had pigeonholes carved in the basalt of the circular room.  The floor was covered with tattered remnants of velum and paper.  He and Yestlick did manage to find several strange scrolls intact enough to be usable.

The next chamber Toral saw a body on the floor with something small hovering over it and left it alone.  The next chamber had paper scraps on the floor similar to the first.  Athydas and Yestlick promptly entered and began searching.  Footlong black and white beetles patterned like ladybugs were uncovered in the mess.  They began flying about.  Yestlick was struck and turned to solid iron.  Athydas cast sleep and crushed the fallen beetles.

The last chamber was empty.  Descending another level showed the first break from symmetry a door with a strange symbol opened to the blank basalt wall.  In the opposite wall the 30' hall led, not to a circular room but, to a 10x10 room with two pools, one a ~12' oval the other a fist sized circle.  Athydas dipped himself in the big pool and pulled out before a strange effect took hold. 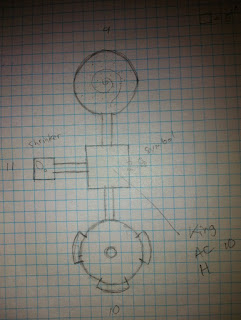 And then a mass of joined people, some with eyes fused shut, some with mouths fused shut, crawled up out of the dark shaft.  It eventually hit Athydas and he began fusing to it.  Hugelina with a mighty stroke, lopped the fused arm off, freeing him.  The party from the level above poured oil and set it alight.  The strange mass lost its grip and fell screaming into the darkness.

Another round chamber had silver wire sticking everywhere out of the floor, small models of objects- chairs, coils of rope, ladders- speared on the ends.  The wires were set in a spiral and at the center of it was a pedestal with a silver cover.  Toral moved to the cover, removed it, and found a soft white substance.  He tried modelling some shapes and pushing them onto the wires but nothing happened.

The round chamber opposite was smooth basalt, empty except for what looked like turnstiles sticking out from the wall hip-high all around the room.  Toral eventually pushed up against one and they all rotated, clacking, and revealing three backlit dioramas.  It took some time but the party eventually figured out that each diorama represented a different scene from their previous adventures.

Eventually they tried molding a sword and putting it into the tiny backpack of Athydas, who was now carrying a sword, of course he always was.  A frenzy of item molding began, shields, rings, what were supposed to be chests but looked like logs.

Eventually the party learned the knobs could be pushed further.  They found a diorama that included Yestlick-the-Iron and moved him up to what appeared to be a battle in the future.  They then began to make items for the battle in earnest: casks of oil, bales of straw, etc.  Toral crushed many of the little pygmy figures with his hand.  Just before the party left Z thought to click the dioramas back all the way to where his beloved hireling Pita was still alive and moved her figure up to the future battle.  And then, on impulse, rained small objects from the other chamber onto the battle scene and, finally, from moved up to a scene of a ship sailing and lifted the whole ship out, placing it in the chasm under the bridge in the battle scene.

It got a little railroady.  I feel the party was uncomfortable to go down into the pylon only because that was what I had planned.  I thought the dioramas would be a fun toy and was happy for them to do whatever they wanted with them, but I did sort of expect them to encounter them during the session, which doesn't seem to be a recipe for good DMing.

You can never guess what other people will do, can you?  I figured they might place tools, and objects in the dioramas to help past "thems", and was trying to figure out how to handle that.  Essentially they could have made a failed mission into the Sodden Temple successful.  I also made the doorway expecting they might search for a door among the objects or even craft a door with the same symbol on it, allowing them to travel back in time themselves.  I wasn't really sure how to handle each scenario.

But at first, they just made items to gift their current selves with.  Then they hit on the idea of moving figures from diorama to diorama.  I hadn't thought of that.  I was curious to see if the player who had lost his hireling would go back and try to save her somehow.  She had fallen to her death in the maw.  I wondered if he might give her a parachute or travel back in time to try and catch her.  Of course he just moved her figure to the future.  I liked that.  Of course that violates the barrier between life and death and I hear when you do something like that black ships of creature appear out of a mist ;)

So, next session the battle continues, a bunch of crap-- including a ship-- is going to rain down from the sky causing damage.  A bunch of pygmies will be crushed by an invisible bigby-like force and the party will have a bunch of oil and straw but no magic weapons for the demon-orang.

Oh yes, the body they saw but were terrified to investigate was just that, a body of a former adventurer with a weaker Ioun stone and a magic sword.  And the pools were basically a shrinker.  I thought they might want to send real stuff back through time (like the magic sword) but they didn't mess with it after Athydas made a save.  That was a goof on my part, on the fly I made a ruling that he should get a save, but I should have just had it shrunk him.  Then they would have had to figure something creative to do with him.

Oh yes, (a lot happened) Toral craft a tentacle and put it on Hugelina's little figure where she is missing an arm.  I wasn't sure what to do with that-- or all the shields and swords they were giving themselves.  It seems too easy to make them magic, but then they actually took the trouble to literally sculpt these things and that is what they chose to give themselves.  So maybe I should make them weakly magical?

Tl;dr: Give your players a reason to use playdough.  I had everyone at the table head hunched over, furiously crafting things.  They enjoyed it.  Next I think I'll try Zak's Jenga skill attempt idea-- keep 'em on their toes, always mixin' it up.
Posted by Telecanter at 7:45 AM