A comment on a previous post lead me back to Johnathan Bingham's funerary island.  I loved the idea because it has the potential to encapsulate a lot of interesting culture/history into a location.  So here is some noodling about other ritual island uses:

Human sacrifice: It's been decades since I've read Robinson Crusoe, but isn't that how he meets Friday?  A tribe is bring him to the island to ritually kill and eat?  You also might have an island that humans are losed on to be hunted.  This could be a last chance for a party overwhelmed and defeated.

Purification: the party lands on an island of all women living separately in huts.  These women are on their period and have to live separately for a certain length of time.  Language barriers might not make this clear.  Maybe it's an island for atoning.  I've wanted to make a location with thermal springs for a long time.  Imagine a volcanic island with a seaside view and hot springs-- awesome location.

Funerary: Two immediate possibilities are islands with caves full of mummies and an island with the cremated remains of folk placed somewhere (urns?).  Maybe the dead are cremated in the hot vent of a live volcano.

Rites of passage: You want to be a warrior in the tribe go bring back the horn of a unikong.  You want to become a shaman you must survive the psychadelic flora for a month.  Maybe young men must go through some sort of obstacle course.

Infanticide: The island of the unwanted, but someone living there saves them and raises them. Or maybe they are only dumped at age five.  Anyway you have an island of children. Language could be a barrier.

Suicide: Volcanic vent again or dangerous creatures.  Weird horrible machines like something out of Kafka.

Misc: Those were the ones I thought might Provide the biggest difference to players encountering an island.  But many rituals might require buildings, statuary, or stone furniture to perform.  Coronations, weddings, naming ceremonies could leave ghost structures that might be interesting if empty.

Here are three more islands for you to use at your whim: 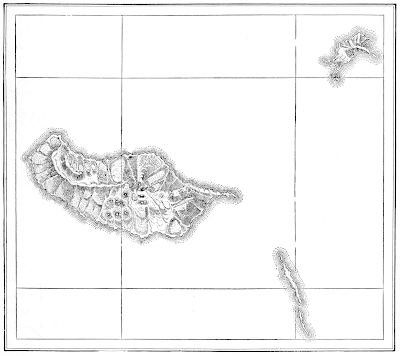 What other rituals might make for an interesting island location?
Posted by Telecanter at 5:33 PM