I like that Swords & Wizardry Core has a picture of fighters wearing each armor type with the Armor Class underneath them.  But inexplicably they gave one of these fighters a shield and then put them out of order, making it pretty useless for a quick reference when you're at the table and trying to remember what AC ring mail is.

This is one of those problems that is showing me DMs of different experience levels need different things (It's odd to me that after 30 years products still don't seem to acknowledge this).  When first starting out there are so many things you have to keep track of, aids can be really helpful.  Now, I pretty much have them memorized.  But it took a lot of fumbling looks in the book with play paused to do that.

So a while back I set out to make a chart for myself and to show players when they start out.  It isn't too important for my players because to speed up start of play I've pretty much let everyone start with leather armor, but I realize this won't always be the case. 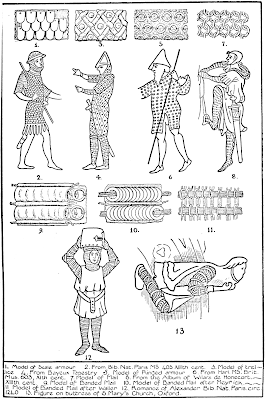 One problem I ran across is that there doesn't seem to be a historic "leather armor" the way there is scale mail or chain mail hauberks.  Yes I've heard of cuir bouilli, but it sure doesn't show up much in books about armor or historical accounts. Another problem is that books on armor tend to two approaches 1) using period illustrations like those in the picture above, which tend to be so crude that the do little more than show us the various ways mails were artistically represented, or 2) using photographs of existing specimens, which skews everything to the odd, extremely expensive, and pieces lucky enough to survive.  What this all means is that I have to search old books looking for suitable illustrations of armor types, in just the right position. Difficult.

I wonder if I should drop leather armor altogether and go for something like padded armor in its place: gambesons, arming doublets, the quilted or cloth armors that a warrior too poor to wear mial would probably more likely be wearing.  Here is as far as I got with my chart: 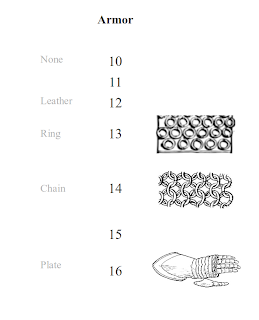 Another issue is my conflicting urges between simplicity and detail.  I like a world that has scale mail, and ring mail, and half-plate.  I also like a system that has unarmored and three armor types neatly separated by 2s.  Maybe I could present it to players as armor classes and have ring be a type of mail, just a poor one.
Posted by Telecanter at 7:33 AM