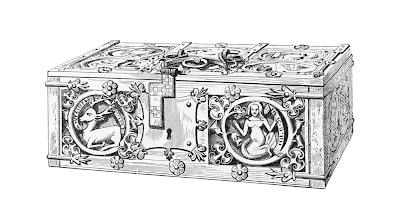 On Monday I offered Sivith the Beautiful as an artifact NPC. I should probably mention that when I say NPC I'm thinking any sentient thing players might run into and choose to interact with. I'm not thinking villains and I'm not thinking uber-powerful players that a sand box would require to function. Sivith, for example, I imagine as very powerful, but the brief bit of info given should give players at least two very strong levers to protect themselves from it, or to manipulate it: 1) its vanity and, 2) I assume any lich will have a weakness for either a) knowledge, and that's why they prolonged their "life," or, b) mortality, they really don't want to die (who doesn't? But they did unspeakable things to avoid it).

On Tuesday I tried to brainstorm some actual physical ways to help players remember/experience effects on their characters. No breakthroughs there, but I appreciated the comments.

On Wednesday, and Thursday I finally started putting in action something I've wanted to do for a while: compiling a selection of my favorite house rules to share with everyone and spread the word about them. I've contacted a lot of people and everyone seems pleased to be involved. I've even started thinking about commissioning some art for this little puppy (don't worry, it will still be a free download and include any art). If you want to send me info on potential house rules of your own you can comment here or send them to thirty 6 and rising at yahoo's email thingy.

I feel a little awkward because I won't be including every house rule I know of, but this is meant to be about those that really caught my eye for being simple while adding a lot to sticky parts of D&D. I also may include a few of my own, hope that doesn't seem toolish, but I'm thinking of it more as sharing some ideas that I hope fulfill the goals that I know the other house rules do.

Give me at least a week to make some progress on this. I want to lay it out in a simple, clean way that matches the rules. I also want to have time to let me buddy look at it and give me feedback before I make it public.

Anyone know how to get a hold of the Werral who posts on Knight's and Knaves Alehouse?

On Friday I pondered treasure types and thought about how they could be more useful for DMs, especially DMs designing to share with others. I would be interested to see someone attempt this. I might, but that would have to be later.

On Saturday I posted some Mad Libs to create spells. I started very seriously, but every blank seemed to be ripe for innuendo. I don't know if the end result will help any one playing D&D, but your submissions cracked me up and it was good for my heart. :)

Okay, I might take tomorrow off. Peace.
Posted by Telecanter at 10:56 AM