Here is a second draft of a dungeon meant to help DMs convey map information to players and designed to be easier for players to understand and draw. 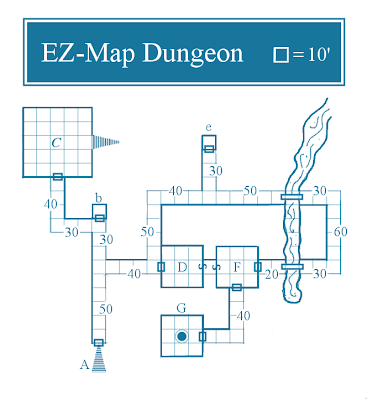 I took your suggestions from the last post, tried to make doors the terminal points of corridors, switched to giving distances to the farthest point in the corridor and made the doors all open in the center of room walls.

I'm going to cheat on lighting, and maybe for a beginning map it's better anyway, by saying that there is lighting in the dungeon.  Torches on the walls every twenty feet or so will simplify mapping.

There might still be a few rough spots, but I didn't want it to be so boring that no one would actually want to explore it (thus the river).

Let me know if you think this works better.  (It looks a little busy to me, but I'm tired of working on it right now)  If there are no big flaws, level two will have rooms with shapes other than square and a little more difficult mapping, i.e. doors that aren't terminal in corridors, etc.

Update: Damn, just realized I was inconsistent in the way I was measuring.  Sorry, I'll fix it in the morning.
Posted by Telecanter at 7:24 PM