Pirates have been a strong interest of mine since childhood.  I was gathering data for a long time to make my own pirate roleplaying game.  To celebrate Talk Like a Pirate Day I offer hireling articles of agreement. 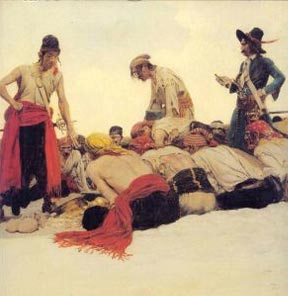 The articles of agreement, pirate articles, always fascinated me.  Here was a force of chaos and anarchy that was held together by a sense of justice and a form of democracy (more than the Queen's navy would ever give them).

Now, I am very leery of anything that makes dungeon exploration mundane.  Tales of the great adventurer guilds of the Forgotten Realms really leave me cold.  But I think there is room, in a civilized location (i.e. remnants of empire) for a similar set of expectations agreed upon for hired help.


So if players decide to seek help outside my city of Nidus.  I think from now on potential hirelings might rquire the pcs to sign an agreement.  What would the agreement include?  I think it should be simple, might vary for combatants and non-combatants.  Maybe as few as five points to the agreement would keep it manageable.  Here is a shot at it from the hireling's perspective:

This person upon setting out with the hirer:
What would you add or change?
Posted by Telecanter at 12:08 PM