Here is a revision taking into consideration The Rubberduck's great map.  It largely avoids the problem I was trying to iron out in the last post by having only one corridor turn.  This might actually be a good way to introduce that to a new mapper: when the party gets to that spot you pause and explain how you'll communicate distances at turns. 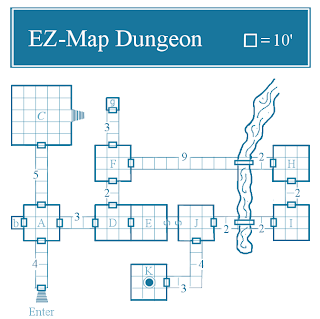 This draft I also muted the room labels and corridor walls to try and make the map easier to read on the fly.  It assumes wall sconces every ten feet, so the DM can just let the party know: "The corridor ends in a door three sconces away."

I would love to see people key this up to their own tastes.  Another advantage of having this first level all lit and having evenly spaced wall sconces, if you set up a nasty encounter that the party has to run from, presumably it will be easier for them to get their map bearings again once they've run to safety.  In fact, I wonder if it might be a good idea to try to induce that, so that a mapper can learn how to start mapping somewhere else on their paper and eventually make sense of how the two fragments match up. Hmm, maybe there's something really bad in E.

Level two, as I imagine it,will have no lighting, and no sconces.  It will have turns in corridors and doors that are not just at corridor ends.  I'd also planned on roughly 12 rooms total, so this could fill about a session's worth of play.


I know some of this is repetition, I'd intended to provide you with a spicy level two by now, but I foolishly merged all my levels in my image when I posted the last image.  So I had to start all over.

Ah well, the cool thing about DIY is that it forces you to learn new skills.  A year ago, I don't think I had a clue what layers in image editing software were for.  Now, for this last pic I'm working with 7 layers (like a bean dip, hah) and it makes it a ton easier to make changes to the map.
Posted by Telecanter at 1:03 PM