Keep in mind this would be for a first run or two, not a convention of publishing dungeon maps. 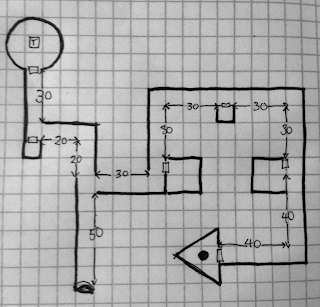 I have a rougher draft of a second level that makes map features slightly more complicated, but I didn't quite finish it.  (Work was a bear today).

"You enter a hallway that is ten foot wide.  Fifty feet ahead, you see an opening on the right.  The hallway continues twenty feet past the opening before ending in a left turn." etc.

Let me know what you think, or any suggestions you might have.
Posted by Telecanter at 9:22 PM