I have never understood why someone introduced to roleplaying would ever think "Hey this would be fun to play competitively." Where did that all come from? Was it the early wargaming roots?

I wonder what kind of different beast D&D might have become if there wasn't so much emphasis on standardization and tournament play. I don't mean that people at home were playing against each other for points, but that most of the classic AD&D modules were designed for tournament play. I don't have enough experience to know for sure but I can't imagine that tournament modules would be designed in the same way a module for a DM's home group might be.

The reason for this post was I was just looking in module A1 Slave Pits of the Undercity (looking for rumors) and saw this: 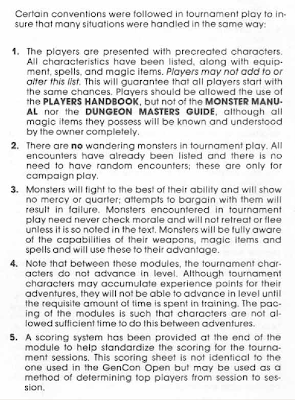 If we sat down together to make a set of rules to de-funify D&D, this seems to be a pretty good start.
I understand that all these things were intentionally sacrificed for standardization in tournament play. But what that means is at some point some people decided that proving they were a better player than you is more important than all these aspects pivotal to the fun of the game.

But if I understand it correctly the way tournaments worked is the team would be scored overall-- how many in the group survived, how much you all managed to explore- not individually. And you would be playing with strangers. Can you imagine a national basketball tourney that placed you in random teams and then had you play basketball with lots of strange rule changes (no passing, no 3 point shots, no freethrows)?

It just seems so odd. Do they still do these at conventions? I imagine it would be much easier with something like 4e.
Posted by Telecanter at 7:19 AM