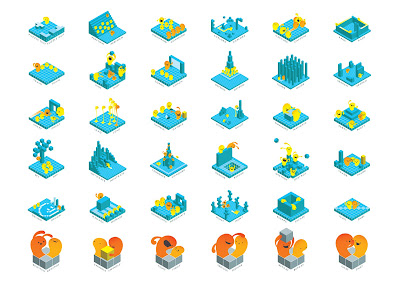 This is Liselore Goedhart's illustration of the basic elements of all video games. It's meant to be part of a card game to help designers come up with new ideas.( via Boing Boing)

I'm always interested in new ways of generating and of abstracting concepts so this has my attention on two counts. And though it was meant for video games I think it could be applicable to pen and paper adventure games. Here are the elements listed:

Some seem to be showcased in certain types of adventures: escape, gamble, defend.

Here are a few that I think are underutilized:

One of the things I always wanted in D&D was to reach the endgame, to have my own barony, design a castle etc. Of course I never got close to reaching the level needed. Why not give players a taste of that by letting them take part in some baron's settlement efforts. They might be hired to scout for suitable locations, protect building crews, and root out local threats. 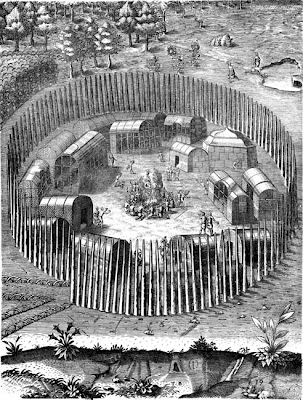 Or maybe they've been hired to build a stockade or crude fort themselves by some . Players have to design, plan and build the structure withing certain time and money constraints. (I wrote this before I read your post Chris :)

Maybe you've used this in a campaign, but I think it would lend itself well to a wilderness hexcrawl. You are party of a trading company looking for sources of amber, spices, or rare beasts that must be captured alive.

Maybe players set up their own trading outpost and on top of defending it from humanoid predations they must trade and be profitable. Yeah, very colonial, but hey, if the humanoids in your world are literal creatures of chaos . . .

--Hmm, was just rereading B2 and it has this to say as a suggestion "After the normal possibilities of this module are exhausted" :

"Or the party might become “traders” operating out of the KEEP, hoping to find adventures as they travel in the surrounding area."

This probably just happens naturally sometimes, but I think it might be interesting to try to plan for it. You have a bunch of people who have never played a rpg before and a veteran or two. Those veteran players must train the noobs in some battle tactics, dungeoneering skills, and get them in a out of a dungeon alive.

Why? Well, it seems a veteran would know every man for himself is not tenable for long term survival. And like a good sergeant, wants his crew less likely to screw up so the vet is more likely to survive . . . and prosper.

A Table for You

I made a d20 table of game seeds for myself by cutting out those that seemed least appropriate to group play or already built into old school play. Roll a couple of times to spur yourself for your next session.

Any ideas for elements missing in Liselore's list? Have you implemented anything in your games similar to my suggestions?

Posted by Telecanter at 7:34 AM