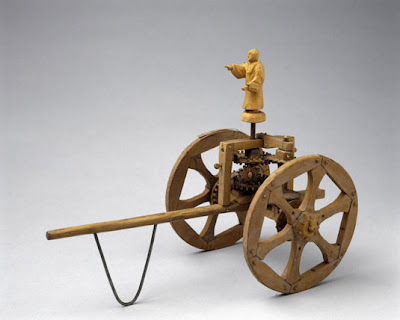 The South Pointing Chariot was a device that would remain pointing South no matter what turns your journey took. It was an early compass device based on differential gears most likely invented by Ma Jun in the 230s. Legend has it, though, that it was created by the Yellow Emperor, Huangdi:

"Huangdi's people were then threatened by a tribe under the leadership of Chi You, who was said to have magical powers and had 81 brothers, each having 4 eyes and 8 arms wielding terrible sharp weapons 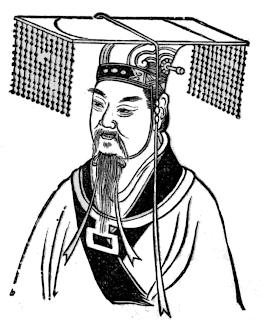 in every hand. Huangdi called upon 8 neighboring tribes to join forces with him and sent the combined army to meet Chi You and his brothers. The two great armies fought for days without a clear winner. Just as Huangdi's army began to turn the tide of battle, Chi You breathed out a thick fog and obscured the sunlight. Huangdi's army fell into disarray and could not find its way out of the battlefield. At this critical moment, Huangdi invented the South Pointing Chariot, and ordered its construction on the battlefield. With the South Pointing Chariot, Huangdi was able to lead his army out of the fog."

If you are having a hard time visualizing the chariot in action, here's a video of an example:

I learned about the chariot through this wooden kit you can buy to make your own. Fascinating. Can you imagine a party of adventurers carefully dragging a little cart through a megadungeon so as not to lose their way? Or delivering one to ruler's army undamaged in order to pull victory from the jaws of defeat?

I'm constantly amazed by the things I've never heard of in our world. On reading this it gave me great ideas for bulky, awkward, and fragile scrying devices. Hopefully I'll post some soon.
Posted by Telecanter at 7:36 AM