This community in India is interesting as an example of nature related practices forming out of necessity (The Bishnoi live in a desert). I thought that it might also work as an alternate culture for Druids to come out of in a campaign. Druids of the desert. 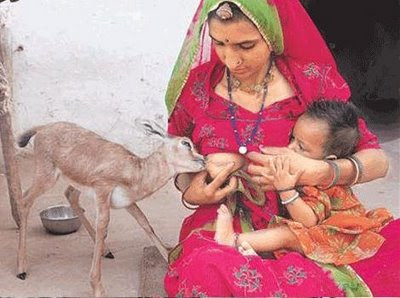 "Their ‘guru’ or preceptor is Jambaji, born in 1451 in one of the warrior sects of Rajasthan. His teachings are based on 29 (bish: twenty, noi: nine) principles that include ‘karuna’ or compassion for all living beings. Bishnois do not cut or lop green trees; instead they use dried cow dung as fuel. They do not cremate their dead as Hindus normally do, because it involves the use of firewood; instead, they bury them. Agriculture is the mainstay of the people; they also carve wood during the time they are not busy on their fields. The required wood comes from trees that have have fallen during storms."

Of course it could just be an interesting culture for players to run into. Imagine they are camping and want some firewood. Or maybe they need to build some seige engines. The Bishnoi wouldn't like it:

"In 1730 AD, Jodhpur king, Maharaja Abhay Singh, wanted to build a palace, and his army set out to cut trees to burn lime for the construction work. They were amazed to find so many khejri trees in the midst of the arid desert.They raised the axe to cut them, only to find themselves besieged by the villagers who offered their bodies as shields for the trees. Heading the protest was a brave woman called Amrita Devi, who bravely embraced death. Her teenaged daughters gave up their lives too. The entire community followed and rose as one and offered their heads. About 363 were killed by the axe, and the king, astounded by their courage, halted further cutting and declared the Khejarli region off limits for logging and hunting."

via Neatorama
Posted by Telecanter at 5:23 PM