I want to make how spell transcription works in my world clear enough that players start making decisions and goals based on that knowledge.  What do you think of this: 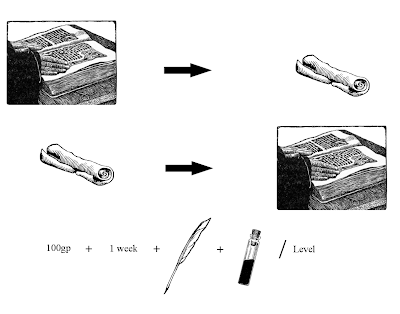 I might add a little text under it.  The quill and the vial mean that it requires blood and feathers from a creature of HD equivalent to the spell level, per Talysman's awesome idea (in the comments).  I might say to my players: "more and more powerful creatures," because they don't know what "hit die" are.

One thing I want to add but don't know how to rule on is for creating an entirely new spell.  I don't know what it should cost.  I don't want players to have to wait for 7th level either, a S&W style campaign will be near its endgame by then, no?  Besides one of the coolest things about D&D were all those named spells. I want my players to create some spells.

But, do they need access to a library?  Access to a tower (but that would, again, be endgame, no?)?

Update: 1) I'm confusing my systems, S&W goes to twentieth, oe is the one capping out around 10th.  Odd that some of my conceptions of the game I want to play are sliding more and more toward some of the original aspects of those rules.

2) I'm thinking it should be cheaper to put a spell into a book than the other way, to encourage players looking for more, but I'm not sure.

Update 2: How's this for a second draft (I changed everything to sp because of my game's silver standard):