Towards a DIY Dungeon

I'd seen PocketMods before, had even played around with putting my houserules on them.  I like what Risus has been doing with them, but Stuart's use of the form as a mini-module blew me away.  And I'm not talking about his particular dungeon but more the way he utilized the form.  It was clean, organized- one map level, one page for a brief key-- and simple.  I know I wished for a comic book dungeon before-- something cheap and cool that non-gamers might pick up.  This seems to head in that direction.  Just one sheet of paper, not too big a deal if you lose it.  You could carry it around in your pocket at school.

Anyway, I was thinking this could be perfect for an OSR version of B1.  You have a 3 level module.  First level is fleshed out.  Second level is mapped, but the learning DM has to pick encounters/treasures from a list in the back. That list is very interesting and evocative in a sentence apiece. Third level is just some graph paper with marks where the stairs come down so they can draw the level themselves.

I was playing around with my EZ-Map dungeon thinking a simple, straight forward map might be good for that purpose.  To make a long story short, I think I'd have to start fresh to make a good 2 level dungeon that fit in the size of the pocket mod pages.  But I figured I'd share what I worked up: 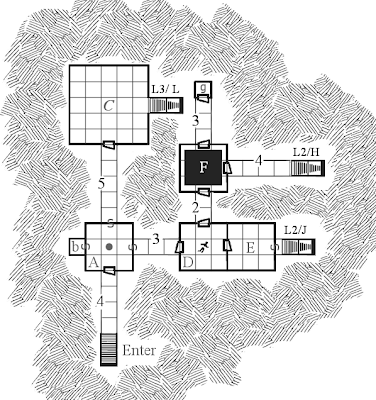 I used Roger's stairs and made a version of his Elvis doors (how can you not use them with a name like that).

I see what I'm guessing are Illustrator brushes on a lot of your maps and geomorphs, so I tried emulating it by copying and pasting a PD texture.  Old school baby. But, it looks pretty busy.

Another mapping bit, JD Jarvis hepped me to ceiling heights on maps, said he saw them on caver maps.  Since then I saw that some of the Harn mappers have actually used them too: 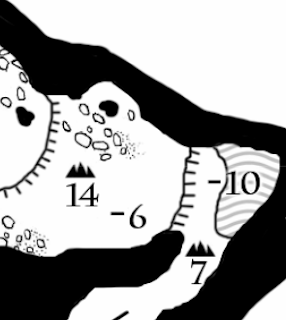 Hard to see here, but I like the little stalactite symbol they use to indicate this.

By the way, I really recommend checking out the downloads at http://www.lythia.com/.  Especially the 3 Harn Pottage collections and the Fortified Manor by Kerry Mould (scroll down a bit).

That manor is sort of the product I always wanted-- lots of detail cooked in, by nothing that has to impinge on my campaign world-- but the industry just doesn't seem to want to make.

Update: I got a better pic.
Posted by Telecanter at 9:07 PM