Okay, here's my next draft of how to handle these in my campaign.  Keep in mind this isn't just about praying to gods, you could use this system for any kind of magic/technology you wanted to have less likely to work the more you used it.  Here are two charts: 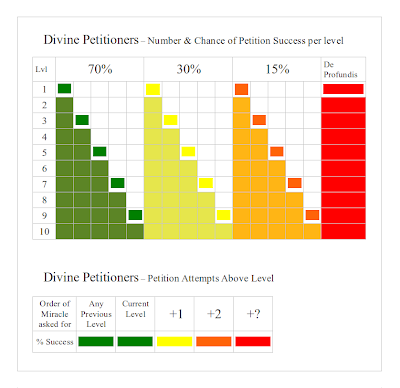 Multiple Petitions
First, you get a certain number of possible petitions every other level.

Well, except I liked Forrest's suggestion that they be able to get into some trouble by asking for too much.  So I added the last dire petition, the "crying from the depths" for aid.  I'll make a table with possible consequences, like being covered with boils, becoming mute, or being unable to ask for aid for a set number of sessions.

More Powerful Miracles
Simple enough?  The system becomes a little more complicated by the fact that you can "stretch" for aid that is really above your ability to ask for.  At any level a petitioner can ask for aid up to two orders of miracle (think spell level) higher than his or her ability.

So, if our example 1st level petitioner above asks to Hold an enemy, a 2nd order miracle, it will use up the normal 70% chance and require the 30% chance to shift one columns to the right, to the more powerful 2nd order.  If that petitioner wants to Heal Light Wounds after that, regardless of whether the Hold was successful or not, they only have a 15% chance petition left now.  And they just can't ask for anything more powerful than a first order miracle.

One of my players has been confused about what she could or couldn't do, but I'm hoping this will make it clearer.  Two possible additions of complexity:

Orisons
From the start I was allowing the petitioners to ask for 3 small things a day.  Basically this was limited to a +/- 1 to one individual-- a save, a to hit roll.  Even those these are tiny, it keeps the clerics thinking of ways they can engage spiritually rather than just whacking stuff.  And they've done this too.

Saint-like Abilities
I just thought of this the other day.  I'm thinking that at 4th and 8th level, petitioners will be granted a permanent ability of their choosing.  I'm hoping these saint-like powers will make the petitioners more interesting.  I asked one player yesterday what he would choose and he said he wouldn't mind having a permanent, glowing halo of light above his head.  Cool by me.

And that's it for my Petitioner powers.

I've also been intending to come up with a negotiated system of creeds and vows with these players so that they have some roleplaying constraints they have to abide by in order for their petitions to be heard.  Maybe if this clarification of petitions is clear, I'll move on to the vows and creeds next.

Update: I just commented in regards to a table the other day about how I thought it made more sense to have levels ascend on a chart and then I made this one.  I guess when making a text chart in a word processor it makes sense that you start from the top and go down, but when I read a visual chart my eye assumes the lower left corner to be 0,0.  Anyway, when fiddling with that I thought my players will really want to see the diminishing returns, well, diminish as you read down the chart too.  So here is another draft I'll try on my players today: 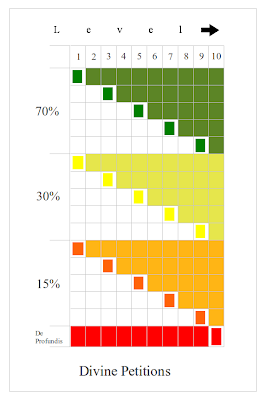 Update 2: I never know whether to make a whole new post or just update the relevant one. This is minor so I'll put it here, a grayscale version of the Player chart for those of you without a color printer (like me): 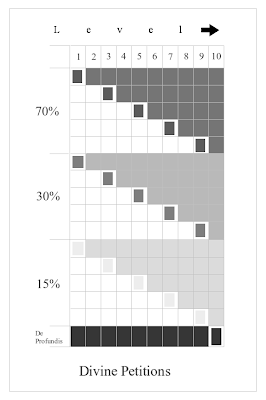 Posted by Telecanter at 6:27 PM